As the single-family rental (SFR) market has boomed in popularity in the last few years, the number of homes being built specifically for renting is also trending upward following a decline in 2013.

The Census Bureau’s Quarterly Starts and Completions by Purpose and Design combined with analysis from the National Association of Homebuilders (NAHB) found that the share of single-family homes built for rent accounted for 4.5 percent of all single-family housing starts as of the end of Q2 2016, based on a one-year moving average.

While this share is higher than the historical average of 2.8 percent, it is lower than the peak of 5.8 percent from early 2013. Still, the number of single-family homes built for rent experienced a significant gain for the year-long period that ended on June 30, 2016—up from 26,000 for the year-long period ending June 30, 2015, according to NAHB. The number includes only homes that are built and held for rent, and not homes built and sold for the purpose of renting.

“With the onset of the Great Recession and the ongoing declines in the homeownership rate, the share of built-for-rent homes rose,” NAHB Chief Economist Robert Dietz wrote. “Despite the current elevated market concentration, the total number of single-family starts built-for-rent remains low in terms of the total building market. However, after falling during 2013, the market share has grown over the past year.” 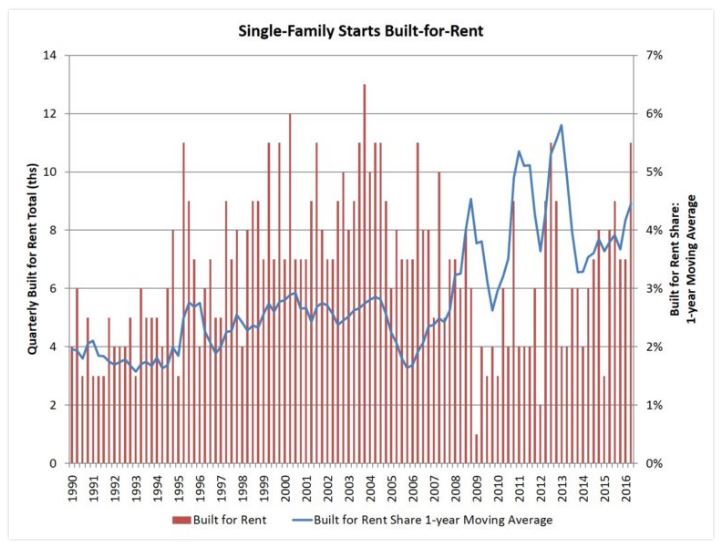 The built-for-rent share, though experiencing an increase in the last few years, still represents a relatively small portion of all single-family rental homes in the country. The reason for this, according to NAHB, is that the primary source of rental housing is existing homes, since homes tend to be rented out as they age. According to the 2013 American Community Survey, about 35 percent of single-family homes are being rented nationwide.

Click here to view the complete report from the Census Bureau.

To reflect the growing popularity of the single-family rental market, the Five Star Institute is hosting its second annual Single-Family Rental Summit on November 1 through 3 in Frisco, Texas. Click here to register for the summit.