2022 Kicks Off With Rise in Mortgage Rates 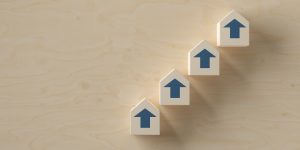 Freddie Mac has today released the results of its latest Primary Mortgage Market Survey (PMMS), the first of 2022, showing that the 30-year fixed-rate mortgage (FRM) averaged 3.22% for the week ending January 6, 2022. This was up over last week when it averaged 3.11%. A year ago at this time, the 30-year FRM averaged 2.65%.

“Mortgage rates increased during the first week of 2022 to the highest level since May 2020, and are more than half a percent higher than January 2021,” said Sam Khater, Freddie Mac’s Chief Economist. “With higher inflation, promising economic growth and a tight labor market, we expect rates will continue to rise. The impact of higher rates on purchase demand remains modest so far, given the current first-time homebuyer growth.”

As 2021 concluded, Redfin found that the number of homes for sale fell to a record low, thus forcing the median home sale price to rise 14.6% year-over-year. A new all-time high of $361,171 was found by Redfin during the four-week period ending December 26, as new listings and pending sales both dropped to their lowest levels since January 2021. Home touring activity was down as well compared to comparable periods in 2019 and 2020. 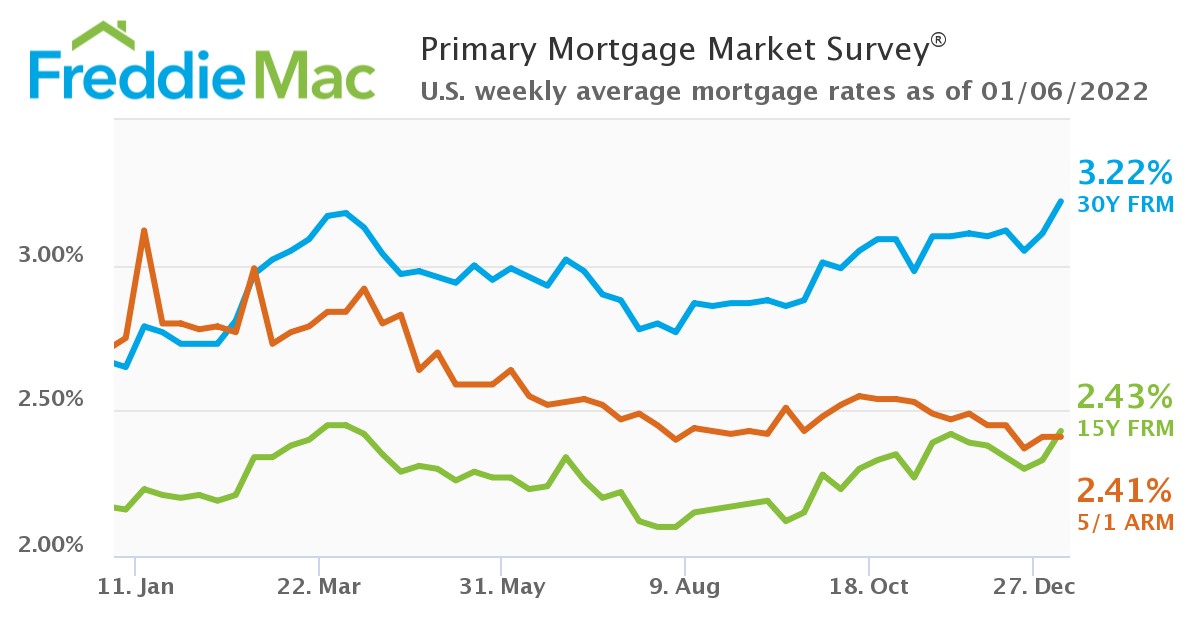 “Housing inventory remains low at the start of 2022, which is keeping prices high. For buyers still reeling from last year’s overheated market and sky-high prices, fast-paced inflation is squeezing their budgets, and offsetting low mortgage rates,” said Realtor.com Manager of Economic Research George Ratiu. “However, the year ahead holds several potential upsides. Milder COVID symptoms could spell an end to the pandemic at some point during the year, especially as we move beyond the winter months. This will further boost economic activity and consumer spending. We also expect more homeowners to act on pandemic-delayed plans and list their homes for sale, which, combined with strong new-home construction, should boost supply. The combined effect of these factors would translate into more homes at better prices for many buyers in 2022.”

Aside from recent Omicron variant concerns, prospective home buyers continue to face affordability concerns, as the National Association of Home Builders (NAHB) reported this week that lumber prices have nearly tripled, causing the price of an average new single-family home to increase by more than $18,600. NAHB noted that this lumber price hike has added nearly $7,300 to the market value of the average new multifamily home, which translates into households paying $67 per month more to rent a new apartment.

Random Lengths, a provider of price assessments and market reporting for the global wood products industry, reported that as of December 29, the price of framing lumber topped $1,000 per thousand board feet—a 167% spike since late August.

Positive signs in the employment sector may drive the market as 2022 begins, as the U.S. Department of Labor reported that for the week ending December 25, the advance figure for seasonally adjusted unemployment initial claims was 198,000, a decrease of 8,000 from the previous week's level. The DOL reported the four-week moving average at 199,250, a decrease of 7,250 from the previous week's revised average, marking the lowest level for this average since October 25, 1969 when it was at 199,250.

Previous: How Efficient is Your Appraisal Operation?
Next: Rental Costs Outpace Owning a Home