In December, during their final meeting of the year, the Federal Open Market Committee decided to raise the federal funds rate. Since then, the mortgage industry has been anticipating the effect this will have on the housing market, but so far, that effect has been little to none.

Freddie Mac's Primary Mortgage Market Survey (PMMS) showed that mortgage rates again moved down, as the 30-year fixed-rate fell for the second week in a row. 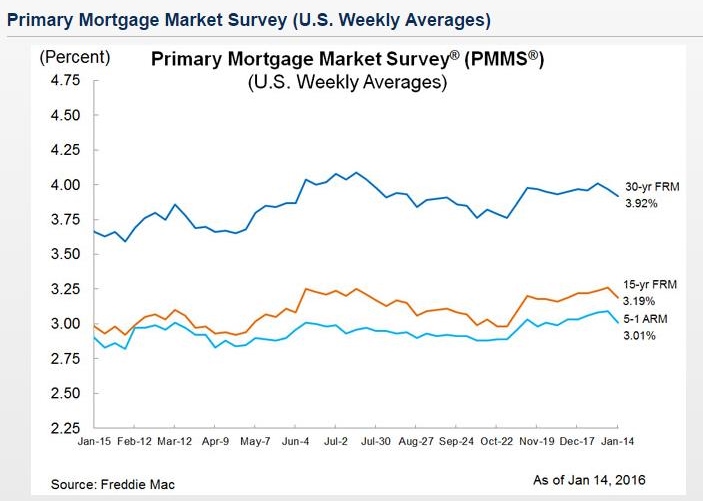 "Long-term Treasury yields continue to drop, dragging mortgage rates down with them," Becketti explained. "Turbulence in overseas financial markets is generating a flight-to-quality which benefits U.S. Treasury securities. In addition, sagging oil prices are capping inflation expectations. The net effect on the 30-year mortgage rate was a 5 basis point drop to 3.92 percent."

The 5-year Treasury-indexed hybrid adjustable-rate mortgage (ARM) averaged 3.01 percent this week with an average 0.4 point, down from last week when it averaged 3.09 percent. A year ago, the 5-year ARM averaged 2.90 percent.

LERETA, LLC CEO John Walsh feels that the rise in interest rates will not completely shake up the mortgage industry right away, but the real concern will surface over the next year.

"Our view is that a rate increase this week should have little impact on the mortgage market. An increase has been anticipated for some time and most recently the markets have been assuming that an increase is now imminent. An increase has already been built into mortgage prices so although there may be a short-term additional bump, our view is that mortgage rates should remain relatively flat for the next several months," Walsh explained to MReport.

"The real question is how fast the Fed will increase rates this year and what the Fed chooses to communicate about 2016 in this week’s announcement," Walsh said. "Lenders are clearly concerned that rapidly increasing rates could curtail refinance volume, although there is a strong argument that cash-out refinances could become a more important part of origination volume as more of the country sees continued home appreciation. Regardless, almost all lenders believe that the purchase market will be the primary focus. The challenge will be the distribution of a slowly recovering purchase market as almost all lenders focus on the channel."