Employment numbers and current mortgage payments among buyers are driving the health of the housing markets across the U.S., according to Freddie Mac's Multi-Indicator Market Index (MiMi).

Freddie Mac found that the U.S. housing market continued to stabilize as the MiMi value rose to 82.5 as of November 2015, meaning that the market is on its outer range of stable housing activity.

According to the report, the MiMi value is up 0.82 percent month-over-month and 7.23 percent year-over-year. Over the last three months, the MiMi has risen 2.09 percent.

The MiMi is up 39 percent from the all-time low recorded in October 2010, but remains far off from the peak of 121.7, the report stated. 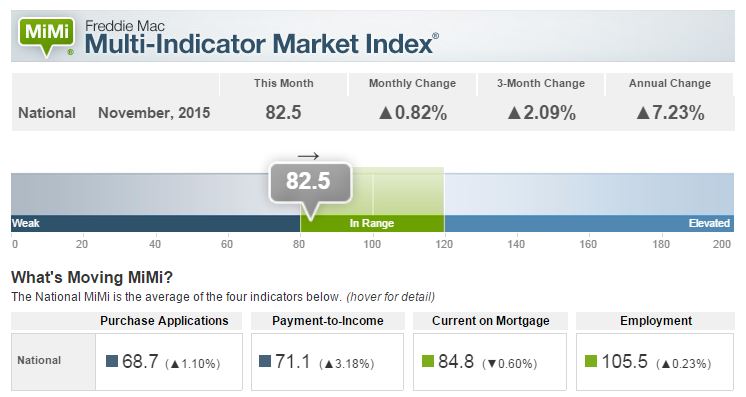 "We're still seeing declines in oil-dependent housing markets, whereas the hardest hit metros from the Great Recession continue to see some of the best improvement as they recover," Kiefer stated. "And at the same time, other markets are seeing even stronger improvement because of robust home sales fueled by strong local economies that remain largely affordable for the typical homebuyer. And in the short-term, we expect homebuyer affordability to remain strong with mortgage rates continuing to look very attractive to prospective homebuyers."

Previous: Fed Reverts Back to Old Ways, No Rate Hike This Month
Next: 5 Reasons Financial Reporting Problems Persist in the Mortgage Industry