Since the TILA-RESPA Integrated Disclosure (TRID) rule was enacted, existing home sales have been on a series of highs and lows, but Ten-X.com (formerly Auction.com) predicts that things could begin to level out as more lenders adjust to the regulation.
Ten-X's Residential Real Estate Nowcast shows that existing home sales for January 2016 are expected to fall  between 5.13 and 5.46 million annual sales, with a targeted number of 5.29 million. This number is up 9.8 percent year-over-year, but down 3 percent month-over-month. 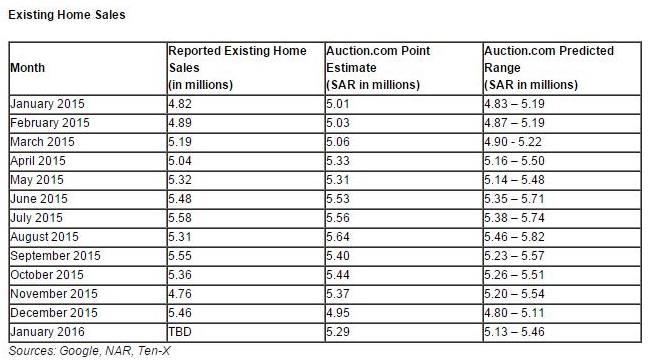 "On a year-over-year basis, it looks like January will get 2016 off to a good start," said Rick Sharga, Ten-X EVP. "It's apparent now that November sales figures were artificially low due to delays associated with the new TRID processes, and December numbers were artificially inflated as lenders quickly worked through the backlog. What we're seeing online suggests that home buyers are slightly more active than they were last year at this time, which is a good sign for the housing market."

The National Association of Realtors' (NAR) December data for existing home sales aligned with Ten-X Chief Economist Peter Muoio predictions that existing home sales would rebound early 2016, but the rebound came a bit early. According to NAR, December's existing home sales bounced back from TRID delays, rising 14.7 percent to an annual rate of 5.46 million in December, up from 4.46 million in November. Year-over-year, existing-home sales are up 7.7 percent, and December's jump will mark the largest increase ever
“Putting the sudden drop and bounce aside, existing home sales in November and December averaged a 5.11 million rate–close to the 5.26 SAAR average pace that persisted across 2015," Muoio stated. “This supports our view that several positive underlying fundamentals–a healthy job market, wage gains, improved consumer confidence and low interest rates–have supported the housing market recovery and should lead to increased sales moving into 2016.”Ten-X also reported that home prices continued their upward trend, with a 7.6 percent year-over-year increase in median existing home prices in December to $224,100, according to NAR. This figure was well within Ten-X's range of $212,156 to $234,488 predicted last month. The Nowcast says that sales prices for existing homes will fall between $216,839 and $239,664 for January with a targeted price of $228,251, representing a 15.5 percent year-over-year increase.

"The lack of inventory, and the mix of properties being sold-largely in the mid-to-upper price range in most markets-continues to drive home prices up," Sharga noted. "At some point this may become a problem from an affordability standpoint, especially if interest rates go up as well."

CoreLogic also released their Home Price Index (HPI) report Tuesday, finding that home prices rose 6.3 percent year-over-year, a much smaller increase compared to Ten-X. Month-over-month home prices rose 0.8 percent.
“Nationally, home prices have been rising at a 5 to 6 percent annual rate for more than a year,” said Dr. Frank Nothaft, Chief Economist for CoreLogic. “However, local-market growth can vary substantially from that. Some metropolitan areas have had double-digit appreciation, such as Denver and Naples, Florida, while others have had price declines, like New Orleans and Rochester, New York.” 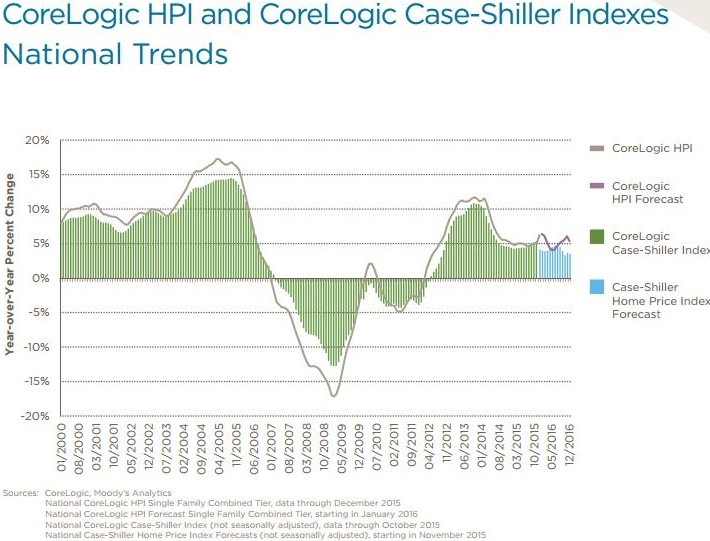 “Higher property valuations appear to be driving up single-family construction as we head into the spring.  Additional housing stock, especially in urban centers on the coasts such as San Francisco, could help to temper home price growth in the longer term,” said Anand Nallathambi, President and CEO of CoreLogic. “In the short and medium term, local markets with strong employment growth are likely to experience a continued rise in home sales and price growth well above the U.S. average.”

Previous: 5 Reasons Tech Innovation is a Must Among Mortgage Businesses
Next: Morgan Stanley Settles Mortgage-Bond Suit With FDIC