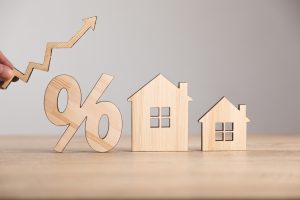 "Mortgage rates increased across the board last week following the recent rise in Treasury yields, which have moved higher due to unrelenting inflationary pressures and increased market expectations of more aggressive policy moves by the Federal Reserve," said Joel Kan, MBA's Associate VP of Economic and Industry Forecasting. "The 30-year fixed rate saw the largest single-week increase since March 2020 and was above the 4% mark for the first time since 2019. Consistent with this period of higher mortgage rates, refinance applications fell 9% last week, and stood at around half of last year's pace. The refinance share of applications was also at its lowest level since July 2019."

As rates rise and applications dip, buyers are still sifting through the limited supply of homes available, as Redfin recently reported, during the four weeks ending February 6, active listings—defined as the number of homes listed for sale at any point during the period—fell 29% year-over-year, dropping to an all-time low of 440,000. Listings were down 50% from the same period in 2020.

"Purchase applications saw a modest decline over the week, with government purchase applications accounting for most of the decrease,” said Kan. “Prospective buyers still face elevated sales prices in addition to higher mortgage rates. The heavier mix of conventional applications again contributed to another record average loan size at $453,000."

Also contributing to the drop in mortgage application volume is the rise in the median asking price of $376,000 recorded during the four weeks ending February 6, marking an all-time high. Higher prices are also forcing up the average estimated monthly mortgage payment, as a mortgage on a typical home for sale rose 25% year over year to a record $1,931. These numbers were based on the all-time high median asking price of $376,000 and an average 30-year mortgage rate of 3.69%.