Home >> Daily Dose >> Homeownership for Hispanics on the Rise, Despite National Stall

Homeownership for Hispanics on the Rise, Despite National Stall

The Hispanic Wealth Project, in collaboration with the National Association of Hispanic Real Estate Professionals (NAHREP) reported Tuesday in their State of Hispanic Homeownership Report that Hispanics have attained measurable homeownership gains for the fifth consecutive year.

Despite the mostly stagnant homeownership report, the number of Hispanic buyers entering the market has continued to grow over the last five years. The only homeownership rate to see a spike, Hispanics will likely be the primary driver of new homeowners for the next decade and beyond.

The homeownership rate increased marginally over the last two quarters, but was fairly unchanged year-over-year, especially compared to the all-time high in 2004, the U.S. Census Bureau reported. This phenomenon has left many in the industry questioning if homeownership has bottomed out.

In addition, although the homeownership rate, while up from a 48-year low in the second quarter of 2015, is still below the peak of 69.2 percent in June 2004.

“The Hispanic homeownership numbers were very encouraging and all leading indicators strongly suggest that the trend will continue,” said Joseph Nery, NAHREP 2016 President, “Policy makers and the housing industry need to recognize that the face of homeownership in America has changed and it is in everyone’s interest to ensure that these new consumers have access to relevant lending products, affordable housing stock and culturally competent service providers in the coming years.” 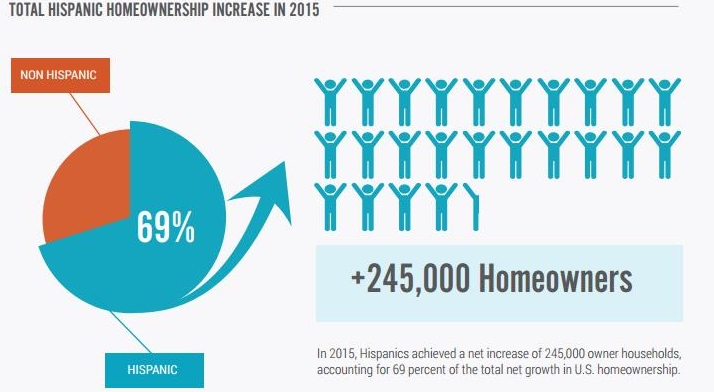 The report showed that Hispanics also led the nation in workforce participation and household formation growth, revealing that this group will likely be the primary driver of new homeowners for the next decade and beyond.

“The State of Hispanic Homeownership Report highlights how important the Hispanic population has become in driving overall housing demand in the US, and how this influence will only continue to grow as their share of the population increases,” said Chris Herbert, Managing Director Harvard Joint Center for Housing Studies, “Crafting housing policies that are attuned to meeting the needs of this important demographic group is essential to ensure they have access to decent and affordable housing.”