Troubled By TRID: The Rule’s Unexpected Impact on Buyers

As a result of the implementation of the Consumer Financial Protection Bureau's (CFPB) TILA-RESPA Integrated Disclosure (TRID) rule, repeat homebuyers have experienced both positive and negative effects from the regulation when obtaining and closing a residential mortgage.

According to the compliance guide issued by the CFPB, the rule merges four disclosures required under TILA and RESPA for closed-end credit transactions secured by real property into two forms. The first, a Loan Estimate must be given or mailed to the consumer no more than three business days after receipt of the application. The second, the consumer must be provided a Closing Disclosure at least three business days prior to the consummation of the loan. TRID was first introduced in 2010 from the Dodd-Frank Wall Street Reform Act, and was approved in 2013.

Fifty-one percent of repeat homebuyers reported that they experienced unexpected costs, fees, or surprises in their most recent home buying experience, according to ClosingCorp's National TRID Impact on Homebuyers Survey of 1,000 adults nationwide who have purchased two or more homes, including one since October 3, 2015. The survey was conducted by Wilson Perkins Allen Opinion Research.

“There’s been a lot of speculation about TRID’s impact and its value to consumers,” said Brian Benson, chief executive officer of ClosingCorp. “Our new study of consumers who have bought homes and gotten mortgages both the new and the old way suggests that TRID is making it easier for consumers to understand the costs and fees that they’ll face at closing. But at the same time, the new rules are adding time and anxiety to the closing process and more than half of the respondents still said they encountered ‘unexpected costs, fees and surprises’. 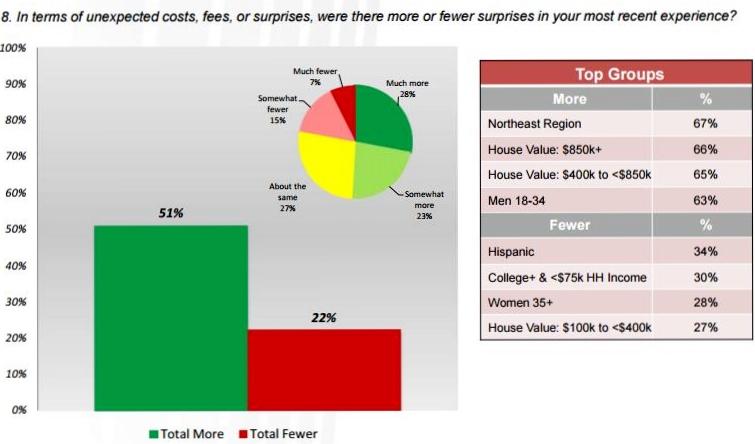 The survey also showed that 64 percent of respondents said it was easier getting a mortgage under the old rules, than under TRID, while 57 percent indicated that it took more time to close under TRID than it did previously.

Despite the negative effects reported about TRID, homebuyers did report a few positives since the rule went into effect October 2015, indicating that the CFPB's rule may be doing its intended job.

The actual closing of the mortgage loan was faster for 70 percent of homebuyers, while 19 percent indicated that it was slower, and 11 percent said it was about the same.

ClosingCorp reported that 63 percent of buyers said that the new “Know Before You Owe” forms for loan estimates and closing disclosures are easier to understand than the old forms. Meanwhile, 68 percent said the new forms did a better job preparing them for the closing costs they would have to pay and 6 percent disagreed. Another 65 percent of the respondents said that the costs and fees were “explained better” in their most recent homebuying experience.

“The findings suggest that our industry has more work to do to get comfortable with the TRID forms and processes, and to educate consumers and their advisors. Our clients and partners believe technology and integrated data and communications will provide the long-term solution to these challenges.”