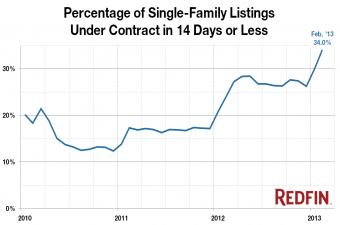 Redfin: Prices Up, Sales Sluggish as Buyers Go to War

Prices rose in February for the 11th straight month as markets across the country picked up speed, according to ""Redfin's"":http://blog.redfin.com/blog/2013/03/february-real-time-home-price-tracker.html Real-Time Price Tracker for the month.

The monthly tracker, which measures home prices, sales, and inventory across 19 U.S. markets, showed prices were up 2.4 percent from January to February. On a year-over-year basis, prices increased 13.2 percent, marking the 11th consecutive month in which prices showed annual gains.

In addition, 15 of the 19 metro areas measured by Redfin reported month-over-month increases, up from eight in January. On a yearly basis, all 19 markets saw price improvements, led by Phoenix, Arizona (30.3 percent), and Sacramento, California (25.6 percent). The smallest gains were in Long Island, New York (2.4 percent), and Philadelphia, Pennsylvania (2.2 percent).

While prices rose, Redfin noted relatively little movement in sales--surprising, considering the jump in home tours and offers observed at the year's start.

""This is due to the fact that especially in the markets in California, Denver, Washington, DC and Austin, a single home often attracts dozens of offers, yet only one buyer closes the deal,"" Redfin's Rachel Musiker said in a ""company blog"":http://blog.redfin.com/blog/2013/03/february-real-time-home-price-tracker.html.

Meanwhile, inventory shortage remains a critical problem, especially with buyer interest quickly rising. According to Redfin, ""[h]omeowners are still ignoring pleas from across the real estate industry"" to list their homes, resulting in a 31.8 percent year-over-year inventory decline.

""If you're a glass-half-full kind of person, you may want to focus on the 1.1 percent month-over-month increase in inventory we saw in February,"" Musiker said.

While low inventory drove down sales and boosted prices, it had one other effect: quickening the speed of the market in certain areas. Thirty-four percent of new listings are now going under contract within two weeks of their debut, up from 30.3 percent in January.

""A big part of the problem is that when a home goes on the market, homebuyers are in a race to get their offers in and start a bidding war,"" Musiker explained. ""In February, more than one-third of new listings went under contract within 14 days of their debut. In San Francisco and San Jose, CA 57 and 63 percent of homes, respectively, sold that quickly."" 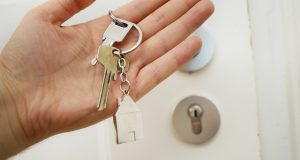 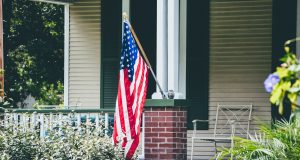