Home builders may be a little hesitant in the confidence arena but despite the lack belief in the market, they do appear to be building more homes in the U.S. This rebound in homebuilding is expected to continue throughout the year, but will it solve persistent inventory issues?

"Single-family construction has been slow to come back on track with long-held norms relative to population and employment growth," the report stated. "We look for stronger gains this year, but improvement will remain excruciatingly slow."

Confidence among home builders has been on a series of ups and downs over the last few months, showing slow, but continued progression in the single-family sector, but they are still faced with concerns about labor and lot shortages.

Home builder confidence in the market for newly-built single-family homes was flat for the month of March at 58, according to the National Association of Home Builders/Wells Fargo Housing Market Index (HMI).

“Confidence levels are hovering above the 50-point mid-range, indicating that the single-family market continues to make slow but steady progress,” said NAHB Chairman Ed Brady, a home builder and developer from Bloomington, Illinois.  “However, builders continue to report problems regarding a shortage of lots and labor.”

On the other hand, home building rebounded this month with a surge in single-family home construction, inducing starts, permits, and completions, signaling newfound confidence in the housing market and economy.

The U.S. Census Bureau and the HUD on Wednesday jointly released new residential construction statistics for February 2016, which showed single-family housing starts bounced back more than expected in February to their highest level in five months, led by a the largest jump in single-family units in nine years. The Wells Fargo report noted that housing supply remains an issue across the U.S. Many recent reports have indicated that although home building is slowly improving, it is not enough to offset the pent up demand among buyers, therefore causing a shortage inventory. According to the data, inventory levels remain exceptionally tight, particularly for starter and trade-up homes. 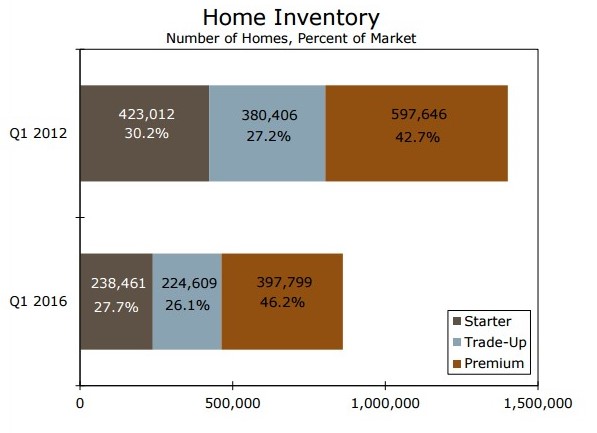