The West dominated May’s best-performing housing markets, according to ProTeck’s latest Home Value Forecast. Markets in California and Utah made up more than half the forecast’s top 10 markets for May, where limited inventory is leading to quick sales and high sales price-to-list price ratios.

Topping the list, however, was Colorado Springs, followed by Boise City and Grand Rapids. California’s highest entry on the list was the No. 4 performing market in May, Modesto. Oakland, Odgen, Utah, Portland, Sacramento, Salt Lake City, and Stockton rounded out the top 10.

All 10 markets had sales-to-list-price ratios of at least 100 percent, except for Grand Rapids, which barely missed, at 99.35 percent. Oakland had the highest ratio, at 102 percent.

While Colorado Springs posted middle-of-the pack numbers in terms of sales and sale prices and also had a high foreclosure ratio, the metro finished at the top of the list because it was the only one to show positive changes in all of the study’s 18 categories. All others showed negative trends in sales percent change, with Portland posting the highest number, 27.85. Portland, however, had the most sales (6,022) and the most active listings (6,436).

“Every day there’s a new news story with a list of top performing cities—but do these cities really reflect what is going on in the real estate market?” said Tom O’Grady, CEO of ProTeck. “We believe that a housing market’s health is made up of many factors. Much like how a doctor must look at multiple vital signs to make a diagnosis, we analyze multiple data points, track trends and use consistent methodology in our rankings.”

The South and Midwest placed most on ProTeck’s bottom 10 list. Texas had two markets on that list, Killeen and Midland. The bottom ten also has some familiar metros, including Madison, Wisconsin, and Atlantic City, the latter placed on the list due to its nagging city management issues, declining gaming revenue taking a bite out of real estate prices. 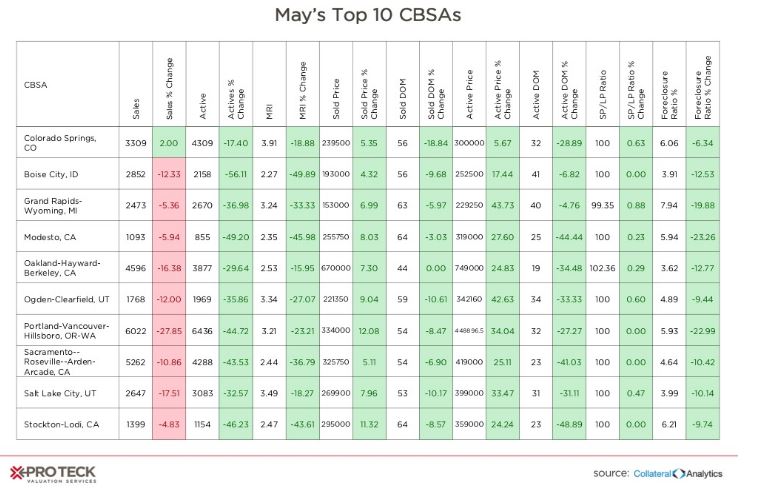 Previous: Five Star to Honor Achievements of Women in Housing
Next: May Brings Further Contraction for Fannie Mae’s Portfolio