After a short ride on the rollercoaster triggered by June’s Brexit vote, mortgage rates have steadied and applications are up, according to the latest numbers from Freddie Mac and the Mortgage Bankers Association (MBA).

Freddie Mac’s newest Primary Mortgage Market Survey showed that average 30-years fixed mortgage rates largely held steady at an average 3.42 percent for the week ending July 14. This is up from last week’s average of 3.41, which is only 10 basis points higher than the all-time low set nearly four years ago.

According to the MBA, the average contract interest rate for 30-year fixed-rate conforming mortgages decreased to its lowest level since May 2013, 3.60 percent. Thirty-year jumbos decreased to an almost identical 3.61 percent from 3.67 percent. 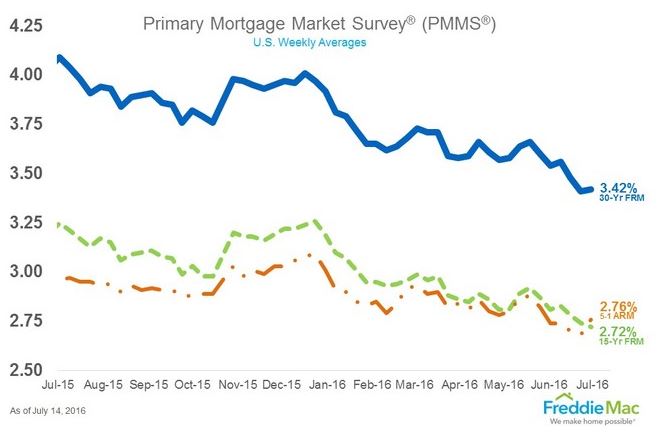 This week, Becketti said, the 30-year fixed rate barely budged. “This pattern suggests that mortgage rates are likely to remain low throughout the summer.”

With low rates, of course, come a corresponding uptick in mortgage apps. According to the MBA’s Market Composite Index, mortgage loan application volume increased 7.2 percent on a seasonally adjusted basis from last week. On an unadjusted basis, the Index decreased 14 percent compared with the previous week.

The refinance share of mortgage activity also grew since last week. The refi share was up from 61.6 to 64 percent of total applications.