The average price of a single-family home reached $265,000 in June, which is 32 percent higher than the market bottomed out in 2012 and only 1.1 percent off from a new peak, according to Black Knight Financial Services’ Home Price Index (HPI) for June 2016 released Monday.

Home prices were up by 5.3 percent year-over-year and 0.8 percent month-over-month in June, marking the 50th consecutive month of home price appreciation, according to Black Knight.

The markets that have seen the most appreciation for the first half of 2016 are Portland, Oregon; Seattle, Washington; and Denver, Colorado, all with greater than 9 percent. 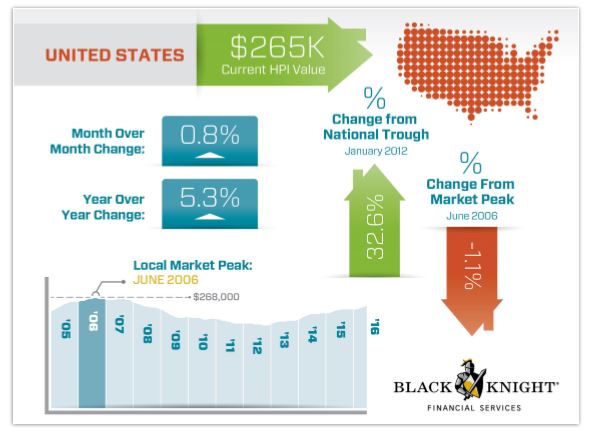 Carson City, Nevada, was the metro with the greatest rate of home price appreciation in June at 2.4 percent, followed by Cleveland at 1.9 percent, according to Black Knight. Two cities in Washington, Walla Walla and Longview, were next at 1.8 percent each.

San Jose and Naples, Florida (0.4 percent), were the only two metros to see negative movement in home prices over-the-month, according to Black Knight.

Previous: The Week Ahead: Which Way Will Pending Home Sales Go?
Next: Judge Throws Out Disparate Impact Case that Sparked Supreme Court Ruling