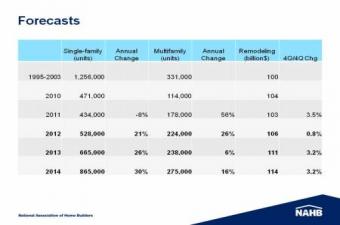 NAHB: Housing Construction on Track for Growth in Coming Years

It's been a good year for housing construction, but the ""National Association of Home Builders"":http://www.nahb.org/default.aspx (NAHB) is still eyeing several ""cautionary factors"" that are holding the recovery down.

In a webinar hosted by the NAHB, economists discussed the housing recovery, what's keeping it going, and what may throw it off course later down the road.

However, the coming months are full of headwinds that could slow growth or put it off track. Crowe cited difficulties with credit, both for borrowers applying for mortgage loans and for builders trying to obtain production credit. Additionally, inaccurate appraisals, seriously delinquent mortgages, and limited inventory of developed lots are all causing problems.

Crowe also expressed concern about the future of lending and finances, including pending Dodd-Frank regulations, the future role of the GSEs in the housing finance system, and the looming ""fiscal cliff"" that could trigger budget cuts and tax increases at the start of 2013.

Mark Zandi, chief economist for ""Moody's Analytics"":http://www.moodysanalytics.com/, voiced a more positive outlook on housing and economic growth. Zandi predicted GDP growth in the 2 percent range this year and ""double that growth closer to 4 percent in 2014 and 2015."" He also expects job growth to go from two million per year up closer to three million in 2014 and 2015.

Zandi did admit his forecast only worked under a number of assumptions, including the expectations that mortgage rates would remain low, the availability of housing credit will improve, and the job market will gain traction as policymakers resolve fiscal issues. Zandi said he felt safe working on the assumption that Democrats and Republicans will strike a deal on fiscal issues to avoid the cliff ahead, saying ""each side has much to lose.""

On a national basis, housing starts are projected to get back to 55 percent of normal production by the end of 2013 and to 70 percent by the end of 2014, said Robert Denk, NAHB's assistant VP for forecasting and analysis.

On the state level, progress isn't so stable. Denk pointed to a number of hard-hit states├â┬ó├óÔÇÜ┬¼├óÔé¼┬Øincluding Arizona, Florida, California, and Nevada├â┬ó├óÔÇÜ┬¼├óÔé¼┬Øthat still have ""much ground to make up."" Meanwhile, several energy producing states, including North Dakota, Texas, Oklahoma, Montana, and Wyoming, are expected to be up and running at normal housing production levels by the end of 2014.