Home builder sentiment fell three points in November to levels more consistent with the second half of 2015 after an upward rise in October to the highest level since 2005.

According to the National Association of Home Builders (NAHB)/Wells Fargo Housing Market Index (HMI), builder confidence in the market for newly constructed single-family homes declined three points to 62 in November from an upwardly revised October reading.

“The November report is pullback from an unusually high October, and is more in line with the consistent, modest growth that we have seen throughout the year,” said David Crowe, NAHB Chief Economist. “A firming economy, continued job creation and affordable mortgage rates should keep housing on an upward trajectory as we approach 2016.”

NAHB Chairman and a home builder from Blue Springs, Missouri Tom Woods noted that the decline this month has did not waver builder confidence in housing market too much, as it has remained in the 60s for six consecutive months. He believes this is "a sign that the single-family housing market is making long-term headway. However, our members continue to voice concerns about the availability of lots and labor.” 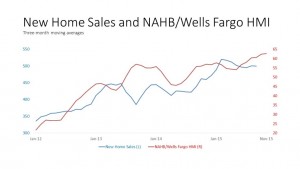 In November, the NAHB reported that two of the three HMI components posted losses.

The component measuring sales expectations in the next six months fell five points to 70, and the sales condition index decreased three points to 67. Meanwhile, the buyer traffic index rose one point to 48.

Regionally, in terms of three-month moving averages for regional HMI, the West had a score of 73, up four points in November, while the Northeast increased three points to 50. Meanwhile the Midwest and South remained unchanged at 60 and 65, respectively.

"Builders continue to express concern about the lack of buildable lots in locations where buyers want to live and the very limited availability of construction labor crews," Crowe said. "These supply constraints have limited builders’ bringing new homes into inventory. However, builders are seeing more potential buyers show up at their building sites, at the model homes and in the offices as consumers become more confident in the housing market and the overall economy."