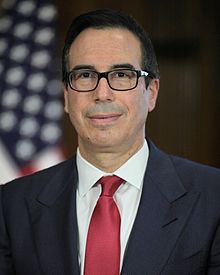 CNN is reporting that Treasury Secretary Steve Mnuchin told Republican senators on Tuesday that COVID-19 could drive U.S. unemployment to 20%.

His comments come shortly after he asked Republication senators to act on a $1 trillion economic stimulus to avert this scenario.

CNN’s report also said the Treasury Secretary was concerned the economic ramifications of COVID-19 could be worse than the Great Recession.

According to The Balance, unemployment peaked during the Great Recession in October 2009 at 10.2%.

The rise of the coronavirus has caused both the Federal Reserve and the federal government has taken actions to combat the virus. On Sunday, the Fed cut interest rates to zero on Sunday in an effort to bolster the U.S. economy as it combats the effects of the coronavirus.

The Trump administration, on Friday, said they are considering a plan to allow homeowners whose income was impacted by COVID-19 to delay mortgage payments.

The report adds a mechanism for borrowers to catch up has yet to be decided. Also, the government will have to determine how to advance money to servicers so investors in mortgage-backed securities get their guaranteed payments.

Mnuchin added the goal would be to send checks to Americans in two weeks to help workers cope with the economic effects of COVID-19. Republican Senators Tom Cotton and Mitt Romney, as well as Democratic Sen. Tulsi Gabbard, have suggested $1,000 per adult.