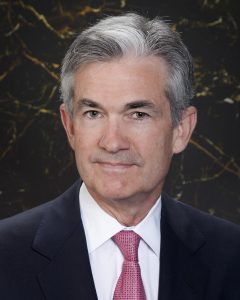 Jerome Powell, Chairman of the Board of Governors of the Federal Reserve System

Jerome Powell has been confirmed by the U.S. Senate for a second term as Chairman of the Board of Governors of the Federal Reserve System for a term of four years, by a vote of 80-19 (one senator did not vote).

Powell took office for his first term on February 5, 2018. In addition to serving as Chair of the Fed, Powell also serves as Chairman of the Federal Open Market Committee (FOMC), the System's principal monetary policymaking body. He has served as a member of the Board of Governors since taking office on May 25, 2012, to fill an unexpired term, and was reappointed to the Board and sworn in on June 16, 2014, for a term ending January 31, 2028.

Prior to his appointment to the Fed, Powell was a visiting scholar at the Bipartisan Policy Center in Washington, D.C., where he focused on federal and state fiscal issues. From 1997-2005, Powell was a Partner at The Carlyle Group. He also served as an Assistant Secretary and as Under Secretary of the U.S. Department of the Treasury under President George H.W. Bush, responsible for policy on financial institutions, the Treasury debt market, and related areas. Prior to joining the Bush Administration, Powell worked as a lawyer and investment banker in New York City.

“I congratulate Chair Powell, Vice Chair Brainard, Governor Jefferson, and Governor Cook on their confirmations and look forward to working with them to make our economy work for everyone,” said Sen. Sherrod Brown, Chair of the Senate Committee on Banking, Housing, and Urban Affairs. “All four have received unprecedented support from across the political spectrum–from the banking industry, state regulators, economists, former government officials, consumer groups, and civil rights advocates. I will continue to work with my colleagues to confirm the Vice Chair for Supervision nominee Michael Barr. I am confident all of the president’s nominees will fiercely guard the Fed’s independence, work to bring down prices, and put workers not Wall Street at the center of our economy.”

In order to curb recent inflationary pressures, on May 4, the FOMC on voted to increase the fed funds interest rate by 50 basis points to 0.75-1.00%, as Consumer Price Index data shows inflation reached 4.2% (the highest level it has been since 2008) and the Index grew itself by 0.8% (the biggest monthly increase since 2009). This marked the first time the interest rate has been raised by 50 points in over 20 years; the last increase this large happened at the committee's quarterly meeting on May 16, 2000.

“I have made it clear that tackling inflation is my top domestic priority,” said U.S. President Joe Biden in a statement. “So I am pleased to see the Senate take a step forward on my agenda to get inflation under control by confirming my nominees to the Fed. I want to thank the Senate for confirming Jerome Powell, Dr. Lisa Cook, and Dr. Philip Jefferson this week, joining the recent confirmation of Dr. Lael Brainard. The Federal Reserve plays a primary role in fighting inflation, and these well-qualified members of the Board will bring the skill and knowledge needed at this critical time for our economy and families across the country.”