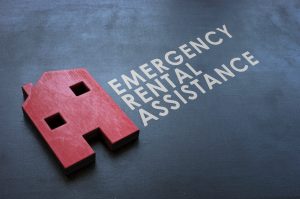 The United States Department of the Treasury has reported that state and local governments have made more than 1.4 million Emergency Rental Assistance (ERA) payments to households and have distributed $7.7 billion since January to support the housing stability of vulnerable renters. Grantees of the ERA program increased the number of households served to more than 420,000 in August, up from 340,000 in July. More than $2.3 billion in rental assistance was distributed in August, which represents roughly three times the amount spent in May. While many jurisdictions have more work to do to meet the urgent demand for this relief in their communities, grantees saw significant growth in August—particularly among state and local agencies that adopted the Treasury’s recommended best practices.

For context, the most recent Census Pulse survey suggests that approximately three million households expressed concern about imminent eviction. Of all these households, Census Pulse data also indicates that those with the lowest incomes are the most likely to be at risk of eviction. Of all households reporting that they are behind on rent, two-thirds of them earn less than $35,000 per year. Previous Treasury data has demonstrated that ERA funds are reaching these tenants, with more than 60% of households served having extremely low income (below 30% of the area median income).

The Biden Administration has continued its efforts to encourage grantees to avoid or reduce unduly burdensome documentation requirements for verifying income, provide assistance directly to tenants when landlords are not cooperative, and protect renters from eviction after payments are made on their behalf. Last month, the Treasury issued policy clarity and recommendations in order to accelerate assistance, including clarifying that self-attestation can be used in documenting each aspect of a household’s eligibility for ERA.

The Treasury has also released a new program design tools to help grantees serve more eligible households. In a partnership with the U.S. Digital Service, these new tools highlight strong application processes being used on the ground by grantees and incorporate feedback from ERA applicants as well as best practices on accessibility, usability, and consideration of community needs. 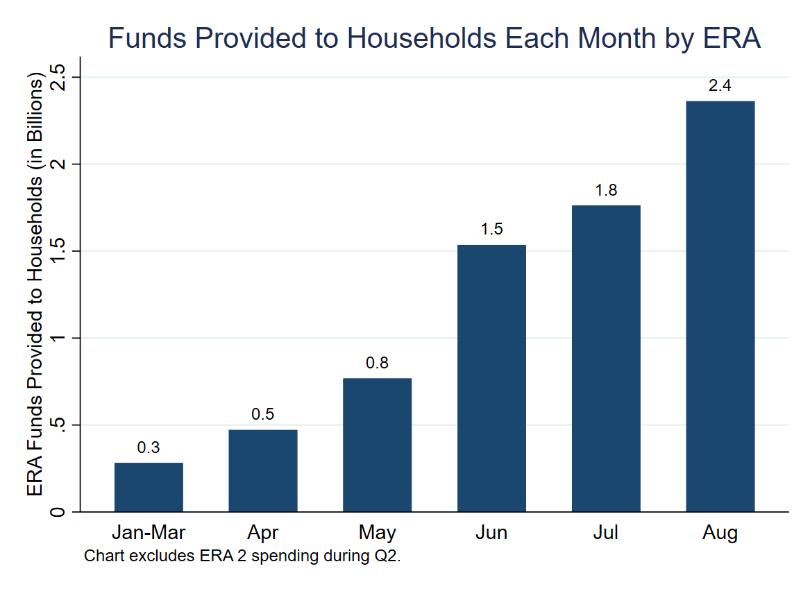 Key Findings From the Treasury’s August Monthly Report
State and local governments have been increasing their spending as they have put in place the infrastructure to be able to serve the large numbers of eligible renters and landlords in their jurisdictions. While many of these jurisdictions lagged behind during the first quarter of the year, their funding distributions have taken off in recent months.

For example, New Jersey, which disbursed no funding in the first quarter, had spent 78% of its ERA1 allocation by the end of August, up from just 37% of its ERA1 allocation a month earlier. As a result, the state more than doubled the number of households served in the month of August compared to July. New Jersey has adopted Treasury’s flexibilities on self-attestation, while also standing up a strong eviction diversion program infrastructure, including incorporating the ERA program into its eviction court system. The state has also engaged in efforts to provide accessible support options to eligible households such as door-to-door efforts in low-income areas and the integration of ERA promotion into vaccine outreach efforts.

On the local level, the City of Nashville and Davidson County, which run a joint ERA program, had also spent 78% of its ERA1 allocation at the end of August by rapidly increasing its distribution of funds over the summer. Spending in August was 130% more than spending in June, and they reported using Treasury’s recommended application flexibilities by allowing the use of self-attestation and direct payments to tenants. This has allowed Nashville/Davidson County to move more applications through their system—in July and August, they served more than four times as many households as in May and June.

Other major jurisdictions, such as New York State, the City of Los Angeles, and Miami-Dade County, have seen similarly large increases in spending. Taken together, these three jurisdictions assisted nearly 27,000 households and spent more than $347 million in August, compared to a collective $800,000 in May. This progress by these and other major jurisdictions was an important factor in the overall growth in rental assistance expenditures to over $2.3 billion in the month of August, with assistance to more than 420,000 households across the country.

Albuquerque, New Mexico’s program administrators have partnered with the state to roll out their ERA program. Program administrators have noted that the fact-specific proxy has been a powerful tool in providing rental assistance to high-need tenants, especially when paired with bulk assistance to utility companies and landlords. Program administrators have also engaged in data checks against the applicants’ participation in other human services programs to expedite applications, which allows them to simplify the documentation process for the majority of their applicants. The program has also engaged with state tax officials to verify applicant and landlord identities on the backend, which helps to increase the integrity of the system without additional burden on the applicant. After spending $0 in the first quarter of the year, Albuquerque has expended two thirds of their allocation at the end of August.