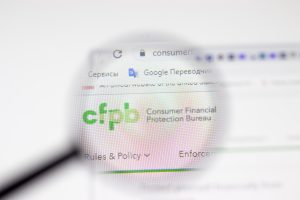 The Consumer Financial Protection Bureau (CFPB) has issued its latest Supervisory Highlights Report, taking a closer look at the Bureau’s public enforcement actions in the first half of 2021.

“Today’s report reveals that irresponsible or mismanaged firms harmed Americans during the COVID-19 pandemic," said CFPB Director Rohit Chopra. "We will continue to supervise firms to halt harmful practices before they become widespread."

Paramount to the CFPB this year was the Bureau’s focus on mortgage servicing supervision due to the mounting number of forbearance requests due to the pandemic. While the CARES Act prohibits mortgage servicers from imposing fees on consumers receiving CARES Act forbearance, CFPB examiners found that mortgage servicers still charged borrowers late fees and default-related fees. These illegal fees compounded the financial issues faced by struggling homeowners in 2021, and examiners found that some servicers failed to refund these fees until nearly one year later.

“The injury was also widespread and impacted a large number of borrowers. Borrowers could not reasonably avoid the injury because they could not anticipate that the mortgage servicers would assess unlawful fees and borrowers had no reasonable means to avoid imposition of the fees,” said the report. “Charging the illegal fees did not provide any countervailing benefit to consumers or competition. In response to these findings, the mortgage servicers remediated impacted borrowers and corrected credit reporting to accurately reflect the current balance and amount past due.”

In addition to its focus on servicers, the CFPB identified several violations of the Equal Credit Opportunity Act (ECOA) by mortgage lenders. The examination team found that mortgage lenders discriminated against African American and female borrowers in the granting of pricing exceptions, compared to non-Hispanic white and male borrowers.

Click here to read the full Supervisory Highlights report from the CFPB.