Home >> Daily Dose >> Where Are the Top Ten Hottest Housing Markets for 2016?

Where Are the Top Ten Hottest Housing Markets for 2016?

The new year is well underway and the mortgage industry can't help but wonder where the best housing markets will be. A Zillow economist predicts a shuffling of cards that will create a new order among the top housing markets of 2016.

"Trendy tech centers like San Francisco, Seattle and Denver hogged the spotlight in 2015. But this year, the markets that shine brightest will be those that manage to strike a good balance between strong income growth, low unemployment and solid home value appreciation," said Zillow Chief Economist Dr. Svenja Gudell.

The report found that Omaha, Nebraska had the lowest unemployment rate, at 2.9 percent. In Richland, Virginia, a strong and diverse economy is pushing income growth, with government, finance, education, and manufacturing jobs robust in the area and expected to continue in 2016.

Zillow found that Boise, Idaho; Ogden and Salt Lake City, Utah; and Sacramento, California all have high forecasted home value appreciation. In the next year, homes are expected to appreciate an average of about five percent.

"As the job market continues to hum and opportunity becomes more widespread, the best housing markets are no longer limited to the coasts or one-industry tech towns," Dr. Gudell stated. "This year's hottest markets have something for everyone, whether they're looking for somewhere to raise a family or start their career." 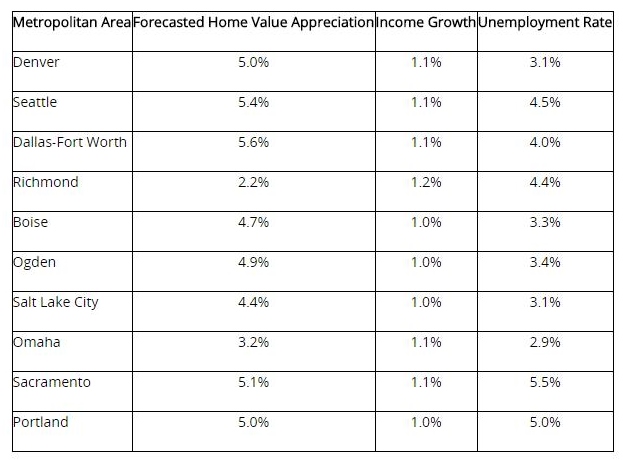