In the midst of what some are calling a global crisis—due to weaknesses in the energy sector and stock market combined with the effects of an overly strong U.S. dollar—home prices continue to move upward. Despite this however the housing sector is just not large enough to carry the weight of the world.

According to the HPI report, home prices rose 5.3 percent year-over-year in November, slightly up from the 5.1 percent increase recorded in October 2015.

"This is further evidence that the U.S. housing market is entering a second expansionary phase since the recovery began in May of 2012. This upward trend of the National Index reflects low unemployment, strong job growth and low-inventory." -Ralph B. McLaughlin, Chief Economist at Trulia.

The index also showed that the 10-City Composite rose 5.3 percent in the year to November compared to 5.0 percent the prior month. Meanwhile, the 20-City Composite’s year-over-year gain was 5.8 percent versus 5.5 percent reported in October. 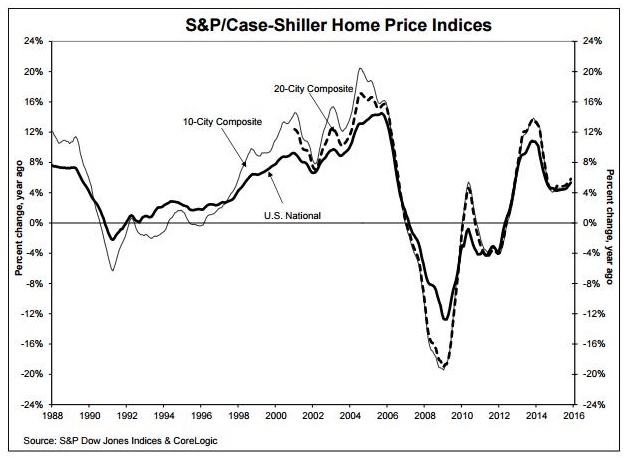 “Home prices extended their gains, supported by continued low mortgage rates, tight supplies and an improving labor market,” said David M. Blitzer, Managing Director and Chairman of the Index Committee at S&P Dow Jones Indices. “Sales of existing homes were up 6.5 percent in 2015 vs. 2014, and the number of homes on the market averaged about a 4.8 months’ supply during the year; both numbers suggest a seller’s market."

Blitzer continued, "The consumer portion of the economy is doing well; like housing, automobile sales were quite strong last year. Other parts of the economy are not faring as well. Businesses in the oil and energy sectors are suffering from the 75 percent drop in oil prices in the last 18 months. Moreover, the strong U.S. dollar is slowing exports. Housing is not large enough to offset all of these weak spots."

The highest year-over-year gains among the 20 cities were recorded in Portland, Oregon; San Francisco, California; and Denver, Colorado with increases of 11.1 percent, 11.0 percent, and 10.9 percent, respectively. McLaughlin believes that "higher prices in these markets should help increase inventory headed into 2016, but at the same time push some homes out of reach for buyers."

“Home prices continue to recover from the collapse that began before the recession of 2007-2009 and continued until 2012. Three cities–Dallas, Texas; Denver, Colorado; and Portland, Oregon–have reached new all-time highs; San Francisco, California is even with its earlier peak and Charlotte, North Carolina is less than one percent below its previous peak," Blitzer stated. "The S&P/Case-Shiller National Home Price Index is about 4.8 percent below the peak it set in July 2006, and 29.2 percent above the bottom it touched in January 2012."

FHFA reported that the index levels for October and November 2015 exceeded the prior peak level from March 2007.

Rob Dietz, the Chief Economist at the National Association of Homebuilders, spoke with MReport on how COVID-19 has impacted the industry and forecasts for home price growth.