Home >> Daily Dose >> All in a Month’s Work: Putting in the Time to Afford a Home

All in a Month’s Work: Putting in the Time to Afford a Home

Hawaii might be paradise, but if you own a home there, you might not get much time off from work to enjoy it. A new study by GOBankingRates Monday reported that Hawaii homeowners typically work 88 hours a month to cover the cost of living in the 50th state.

To put that another way, the hours Hawaii homeowners work during the first two weeks plus the following Monday of every month, given a standard workweek, go straight into their mortgages.

The District of Columbia also broke the 80-hours-a-month barrier, just edging out California for second place on the list of places residents work the most in order to pay for their homes. Hawaii’s place at the top shows that residents of the Aloha State work an average of three times as many hours as those in Ohio, where homeowners work an average of 30.76 hours a month to afford their homes. Michigan, Indiana, Iowa, Missouri, and Kansas also clocked in with fewer than 35 hours a month. 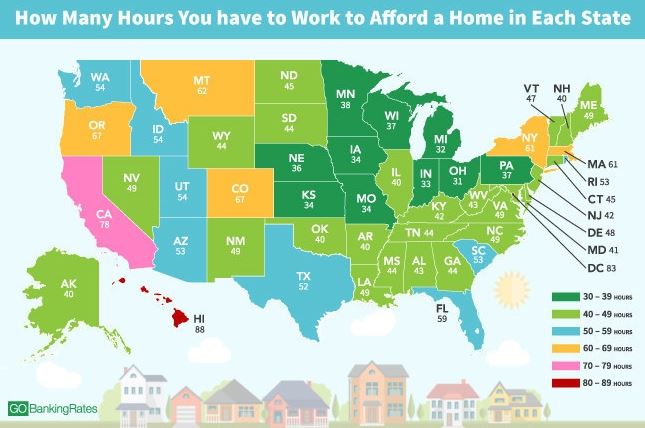 "It's one thing to know the amount of money you're paying each month to cover your mortgage, but thinking of it in terms of working hours gives that expense a whole new meaning," said Kristen Bonner, research lead on the study. "Our research provides a fresh perspective on a topic so heavily discussed among Americans. Sure, high home prices are nothing new, but our data takes it one step further by displaying how many work hours a month go directly toward affording a home."

According to GOBankingRates, notable differences in median household incomes among states means that a low mortgage rate or low home listing price don't necessarily equate to fewer work hours a month required to afford a mortgage. Arkansas, for example, is just one of five states where the average monthly mortgage is less than $800, yet residents there work 40 hours per month to afford their mortgages.

In general, the report found, homeowners in Western states, which all featured in the high end of hours worked, need to contend with higher housing prices overall.

Monday’s study complements GOBankingRates’ report last week that calculated how many hours it takes for Americans to afford to live the Millennial lifestyle (defined as necessities such as rent plus discretionary items such as daily coffee and events tickets). The firm found that Millennials on average must work roughly 68 hours a month to afford just the rent. 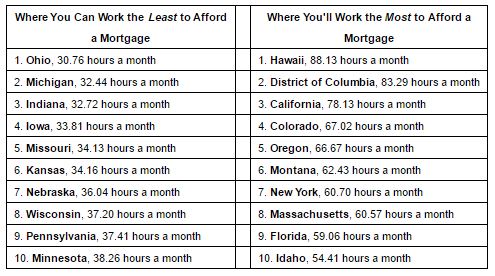 Monday’s report also complements a report GOBankingRates did in July that found that in three states (Hawaii was one, and so were Colorado and Idaho) it was much more expensive to own a home than to rent.