Home >> Daily Dose >> Home Values Climbing But Still Not Quite There

Home Values Climbing But Still Not Quite There

The median value of a U.S. home has increased year-over-year every month for four years but have yet to reach their pre-recession peak, according to a recent study from Zillow.

In July, the median U.S. home value increased over-the-year by 5.1 percent up to a value of $187,300, according to the Zillow Home Value Index. July represented the 48th consecutive month of increases. But that is still about 4.7 below the pre-recession peak median home value of $196,600 reached in April 2007. And according to Zillow Chief Economist Svenja Gudell, homes may not regain that 4.7 percent until late in 2017 or later.

“On first blush, it may be hard to believe that after four years of growth, the market is still not back to pre-recession high,” Gudell said. “But that kind of hot-take reaction ignores both the length and depth of the housing recession, and the strength of the boom that preceded it.” 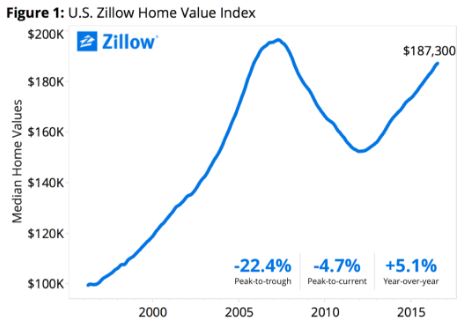 In some metros, home value appreciation in July reached or exceeded the pre-recession peak of 11.4 percent. Portland had the highest rate in July at 15 percent (up to $334,900), Dallas was second at 11.9 percent, and Denver was third at 11.3 percent. Home value appreciation in San Francisco, a famously expensive place to live, has slowed from 12 percent in January to 6.6 percent in July.

There are some Midwestern markets that continue to struggle eight years after the crisis. In Indianapolis, home values declined by 3.5 percent year-over-year in July down to $130,800. And while Indianapolis was the only large metro in the country to experience a decline in home values in July, several markets experienced slower-than-U.S.-average home value appreciation, such as Cleveland, Columbus, Chicago, Cincinnati, and St. Louis. Gudell said some Southwestern and Southeastern markets that were hit hard by the recession will likely take years to reach their peak home values. The same is true for markets like Las Vegas, Orlando, Riverside, Miami, and Tampa, where home values appreciated at faster than the U.S. rate in July but remain more than 20 percent below pre-recession peaks in all of those markets, Gudell said.

Previous: High Rents are Creating First-Time Homebuyers
Next: What is the Industry’s Hangup with eMortgages?