Mortgage loan application defects took an unexpected turn in August and declined 2.4 percent, but there are questions as to whether or not loan defects will continue this downward trend.

First American Financial Corporation released their Loan Application Defect Index for August 2015, which estimates the amount of defects found in mortgage applications. The index showed a 2.4 percent decrease in defects in August as compared with July and decreased by 8.9 percent as compared with last year. In addition, defects are also down 19.6 percent from the October 2013 peak.

First American questions if this month's defect improvement is the reversal of the upward trend.

"Even though there was a slight improvement this month, overall the Defect Index has been consistently trending toward increased risk since the series low point in March 2015," First American said. "The index is up 5 percent from the trough, yet remains well below the level of defect risk observed throughout most of the historical series. Whether this month’s improvement is the reversal of the trend toward increased risk will be determined in the coming months."

“While nationally, defect risk has been increasing throughout the homebuying season, this month’s index moved counter-trend toward less risk," said Mark Fleming, chief economist at First American. "Purchase, investor, adjustable-rate and non-single-family transaction types are all more risky than their category alternatives. Defect risk continues to be concentrated in markets in Texas, Florida and Michigan. Nonetheless, given the increasing number of homes lost to wildfires in California, we are monitoring these natural disaster impacted markets closely for any increase in fraud-related defect risk.”

California has a defect risk below the national average, but as wildfires continue to burn in California and more homes get destroyed,  the risk of fraudulent defects increases in the impacted areas.

“Because the opportunity for collateral-based fraud schemes increases after a natural disaster, we are turning our attention to wildfire impacted areas in the west, and California in particular," Fleming said. "We’ve learned from natural disasters, such as Hurricanes Katrina and Sandy, that the incentive and opportunity to conduct mortgage fraud increases when property is damaged and destroyed. Given the large number of homes impacted by wildfires this year, we will monitor this particularly costly form of mortgage defect closely in the next few months.” 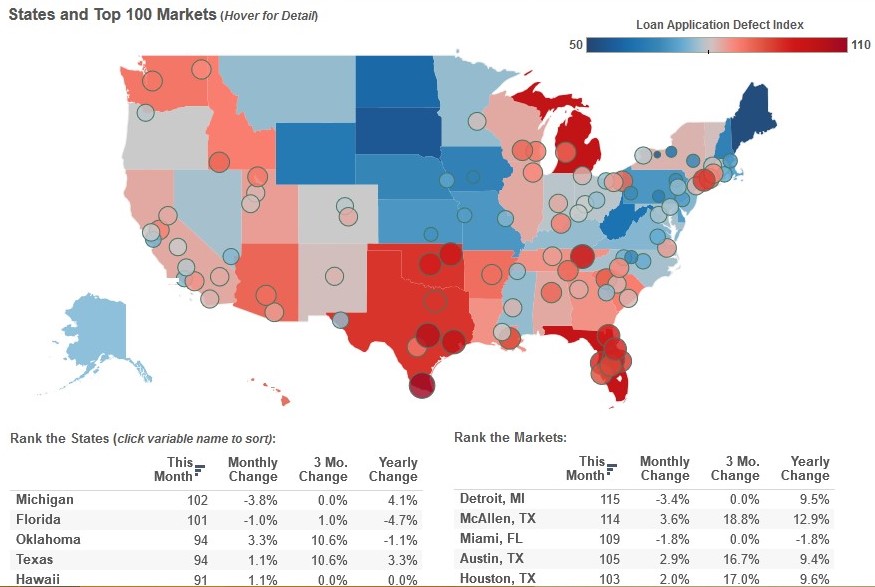