The Pending Home Sales Index (PHSI), which is based on contract signings, decreased 2.3 percent to 106.8 in September, their second lowest index reading since 103.7 in January. In August this number was downwardly revised to 109.3 and a year ago, the number was 103.7. The index has also increased year-over-year for 13 consecutive months.

"There continues to be a dearth of available listings in the lower end of the market for first–time buyers, and Realtors in many areas are reporting stronger competition than what's normal this time of year because of stubbornly–low inventory conditions," said Lawrence Yun, NAR chief economist. "Additionally, the rockiness in the financial markets at the end of the summer and signs of a slowing U.S. economy may be causing some prospective buyers to take a wait–and–see approach." 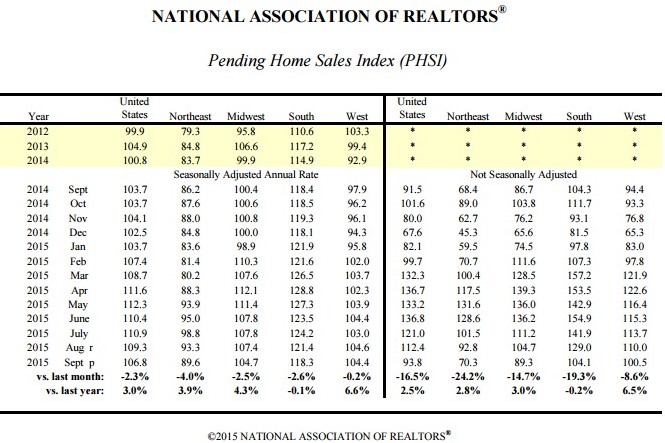 According to NAR, all four major regions' contracts signing declined in September.

The PHSI in the Northeast decreased 4.0 percent to 89.6 in September, but remains 3.9 percent above a year ago.

"There continues to be a dearth of available listings in the lower end of the market for first–time buyers, and Realtors in many areas are reporting stronger competition than what's normal this time of year because of stubbornly–low inventory conditions," -Lawrence Yun

Yun believes that the housing market will be still be a positive factor in the overall economy, despite the loss of contracts.

"With interest rates hovering around 4 percent, rents rising at a near 8–year high, and job growth holding strong—albeit at a more modest pace than earlier this year—the overall demand for buying should stay at a healthy level despite some weakness in the overall economy," Yun explained.

The National Association of Home Builders Director of Economic Services Stephen Melman, J.D., noted that although the PHSI fell in September, existing sales were up.

"Coming just three days after a surprisingly weak new home sales report for September, NAR attributed the PHSI decline to the “stubbornly-low inventory,"" Melman said. "However, disappointing job creation numbers in August and September suggest the decline is a demand-side issue. Despite these recent reports, builder confidence reached its highest level in ten years, painting the prospect of a good year for builders in 2016."