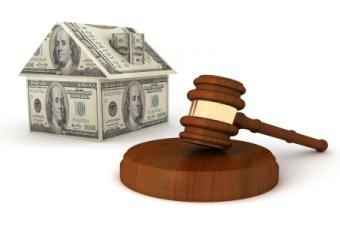 The Federal Deposit Insurance Corp. (FDIC) has filed a complaint in a Manhattan federal court accusing Bank of New York Mellon of breaching its duties as bond trustee for $2.06 billion worth of residential mortgage-backed securities (RMBS) purchased by an FDIC-insured bank in Texas which later failed, according to multiple media reports.

The FDIC took Austin, Texas-based Guaranty Bank into receivership in 2009, and the agency claims it suffered losses of more than $440 million in March 2010 when it sold 12 mortgage-backed securities that were originally issued by the EMC Mortgage Corp unit of Bear Stearns and by Countrywide Home Loans in 2005 and 2006, according to a report from Reuters. Both Bear Stearns and Countrywide were bought out in 2008 by JPMorgan Chase and Bank of America, respectively.

The lawsuit, filed in the U.S. District Court for the Southern District of New York, claims that BNY Mellon "shirked its duty" as a bond trustee to make sure that the securities were not defective. Among the claims made by the FDIC are that servicers collected "excessive fees" for servicing the loans in the covered trust after they defaulted, which resulted in "enormous losses" for the plaintiff, according to the reports. 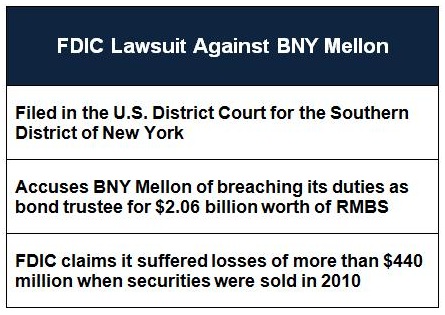 A spokesperson from BNY Mellon could not immediately be reached for comment.

This is not the only lawsuit the FDIC has pending against a bank over RMBS sold to Guaranty Bank. Earlier in August, the Fifth U.S. Circuit Court of Appeals in New Orleans revived a suit filed in 2014 by the FDIC accusing Deutsche Bank, Goldman Sachs, and the Royal Bank of Scotland of fraud with regards to $840 million worth of mortgage-backed securities sold to Guaranty Bank in 2004 and 2005. A judge in Austin had previously dismissed the FDIC's suit against the three financial institutions, claiming that the suit had not been filed in time under Texas law.

The FDIC has a lawsuit similar to the BNY Mellon case pending against bond trustee U.S. Bancorp over the sales of about $248 million worth of RMBS to Guaranty Bank, citing losses when those RMBS were sold.

Previous: Mortgage Rates Slightly Lower Amid Little Movement in Financial Markets
Next: Rising from the Ranks