The Art of Finding ‘The One’ 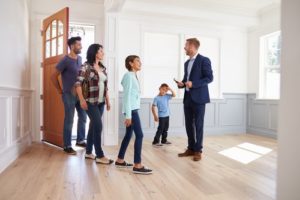 With competition super-heated for houses, most buyers are having to visit more than half a dozen dwellings—not including the ones they tour virtually online—before spotting their perfect pick, according to ValueInsured’s Q2 2018 Modern Homebuyer Survey.

On the average, U.S. homeowners report they’ve padded through a total of 7.4 properties before buying the one they currently own, the survey found. More than one in four (26 percent) said they toured 10-plus homes before buying. Baby boomers toured the most —7.8—before finding their favorite. Close on their heels, Gen-Xers reported having toured 7.7 homes.

“It is possible that more seasoned buyers are discriminating in choosing a home that they are willing to buy, or they rely less on online websites to help them prescreen homes before touring,” ValueInsured said.

The amount of tours homeowners take before finding one they like or having their offer accepted varies by region, the company found. California homeowners report having toured 8.7 homes before buying. In Washington state, that number drops a touch to 7.7.

Switching gears here, 7.4 percent of homeowners report having bought their most recent home without seeing it in person before making an offer. These virtual viewers inspected the property only in photos, online, or via a representative. Stereotypically digitally savvy, millennials surprisingly were the least likely generational segment to have bought a home sight unseen (5.9 percent).

A particularly compelling finding: Although millennials expect to tour an average of nine homes before buying, they actually only tour 6.4 before making an accepted offer. There could be few reasons why, the company says, including that some starter-home buyers are not as persistent or patient as planned. Plus, today’s overheated housing market could have buyers—and, increasingly, millennial buyers—moving faster because they’re afraid of being priced out. Also, many starter-home buyers might be (too) quick to make an offer when they find a home in their budget and end up not touring as many properties as planned.

“Given the discrepancy between the amount of homes they plan to tour versus actual number of homes toured before buying, and the high level of remorse experienced by millennials, it appears they could be buying hastily, which could eventually prove detrimental in a market climate where many are buying at the peak and where 1 in 3 are tapping into retirement savings in order to afford the home,” ValueInsured said.

2018-07-31
Alison Rich
Previous: Better to Buy or to Rent?
Next: How Loans are Getting Younger, Savvier, and Safer