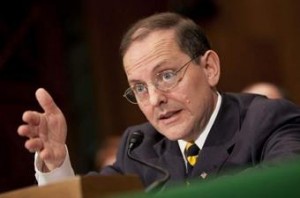 After serving the Federal Housing Finance Agency (FHFA) for nearly six years, former acting director and current senior deputy director Edward DeMarco announced his intent to part ways with the agency at the end of April.

“I appreciate your invitation to assist you with the recent leadership transition and I have been pleased to do so,” the message reads in part. “With the transition now well along, I believe the time has come for me to seek other opportunities.”

He made no announcements about his future plans.

DeMarco’s 28-year career as a public servant has spanned multiple agencies, including the Social Security Administration, the Department of the Treasury, the U.S. General Accounting Office, and the Office of Federal Housing Enterprise Oversight (OFHEO), FHFA’s predecessor agency, where he served as COO and deputy director. Starting from FHFA’s inception in 2008, he worked as the agency’s COO and senior deputy director for Housing Mission and Goals.

It was in 2009 that President Obama designated DeMarco as acting FHFA director, moving the former deputy into a role that made him a lightning rod in the ongoing debate over how to move housing forward after the crash.

Perhaps the biggest point of contention in DeMarco’s tenure leading the agency has been his steadfast refusal to direct Fannie Mae and Freddie Mac to allow principal forgiveness on troubled mortgages. He expressed his own thoughts and that of FHFA on the matter in a statement to lawmakers in 2012:

“Given our multiple responsibilities to conserve the assets of Fannie Mae and Freddie Mac, maximize assistance to homeowners to avoid foreclosures, and minimize the expense of such assistance to taxpayers, FHFA concluded that [plans for principal reduction options] did not clearly improve foreclosure avoidance while reducing costs to taxpayers relative to the approaches in place today,” he said.

While his stance attracted praise from some—including Tennessee Sen. Bob Corker, who since then has become an active voice in GSE reform—it also made him a target for irate consumers, who started petitions calling for his dismissal. (Also jumping into the fray was noted economist and liberal columnist Paul Krugman, who made his feelings known in a piece titled simply, “Fire Ed DeMarco.”)

Nevertheless, DeMarco continued to stick to his policy, even in his resignation letter, noting: “FHFA has existed for less than six years and during that time has faced enormous challenges that required balancing multiple legal and policy requirements and goals.”

As a closing thought, he also expressed his “earnest hope” that recent initiatives from policymakers to reform housing finance take hold.

“I have publicly stated numerous times that the conservatorships of Fannie Mae and Freddie Mac were never intended to be a long-term solution,” he said. “Congress must act to bring the conservatorships to an end and chart the course for a new structure for housing finance.”

For his part, Watt—who separated himself from DeMarco’s style early on by suspending a prior directive to raise guarantee fees—lauded the departing deputy for his work as the agency moved from one director to another.

“Ed has been an invaluable asset to FHFA and I appreciate his assistance to me during this transitional period,” Watt said in a statement. “Throughout his 28 year career as a public servant he has made many important public policy contributions grounded in his strong background in housing finance. I wish him the very best in his future endeavors.”