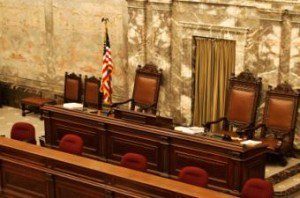 The senators cited a report from Capital Forum that claimed Wells Fargo has failed to compensate customers affected by the bank's auto-lending practices. Additionally, the letter calls for a third party to monitor Wells Fargo’s remediation program.

"Given Wells Fargo's history of unlawful activity and its current leadership's apparent inability to successfully make things right, I strongly urge the OCC and the CFPB to take additional action," the senators wrote in their letter to the OCC and CFPB. "Regulators should require Wells Fargo to fire the bank's President and CEO Timothy Sloan and to install a third-party monitor so that customers the bank cheated can receive the restitution they deserve."

Earlier this month, Sloan appeared before the House Financial Services Committee to address the bank’s progress in providing reparations related to past scandals and how the bank is working to improve its culture and better serve its customers.

That hearing stemmed from a 2016 incident when the CFPB, OCC, and Los Angeles City Attorney fined Wells Fargo Bank collective penalties of $185 million for opening millions of deposit and credit-card accounts in customers’ names without their consent or knowledge. The CFPB and OCC imposed the bank with civil money penalties and demanded restitution to harmed customers.

In the follow-up hearing, Sloan defended the bank's response, stating that Wells Fargo has worked toward a change in leadership, culture, and practices. Sloan pointed out that Wells Fargo has created the required ethics training for all team members titled “Change for the Better.” He also added that he “cannot promise perfection” but suggested that the changes implemented will act as a deterrent to further issues.

Senator Warren had originally called for Sloan to be removed in October 2018, a call she renewed last month following Wells Fargo's alleged failure to comply with an OCC consent order related to weaknesses in its anti-money-laundering controls.

"These recent reports provide more evidence that Wells Fargo is currently fundamentally broken, with a record of misconduct that has lasted for years," wrote Senators Warren and Brown in their letter to Chairman Powell. "There is no evidence whatsoever that these problems can be fixed under Mr. Sloan's watch, and the Federal Reserve should take no action to remove the growth cap until Wells Fargo replaces Mr. Sloan as President and CEO."

The senators’ full letter to Powell can be found here.

Editor's note: MReport reached out to Wells Fargo for a comment on this story but has not yet received a response.

Previous: Weighing Homebuyer Optimism
Next: The Shift to a More “Balanced” Mortgage Market