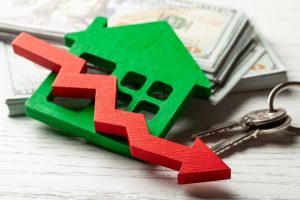 The latest S&P CoreLogic Case-Shiller Index for April has found that even though home prices remain at record highs and mortgage rates continue to edge toward the 6% mark, buyers are still in the hunt and have kept the market competitive.

Tampa, Miami, and Phoenix reported the highest year-over-year gains among the 20 cities in April, as Tampa led the way with a 35.8% year-over-year price increase. This was followed by Miami with a 33.3% increase, and Phoenix with a 31.3% increase. Nine of the 20 cities reported higher price increases in the year ending April 2022 when compared to the year ending March 2022.

“April 2022 showed initial (although inconsistent) signs of a deceleration in the growth rate of U.S. home prices,” said Craig Lazzara, Managing Director at S&P DJI. “We continue to observe very broad strength in the housing market, as all 20 cities notched double-digit price increases for the 12 months ended in April. April’s price increase ranked in the top quintile of historical experience for every city, and in the top decile for 19 of them.”

The non-seasonally adjusted month-to-month index slowed as well, up 2.1% in April from a 2.6% jump in March. April’s increase was the second strongest in the data series following a 2.3% increase last April. Between 2015 and 2020, the monthly index changes from March to April averaged about 1%. 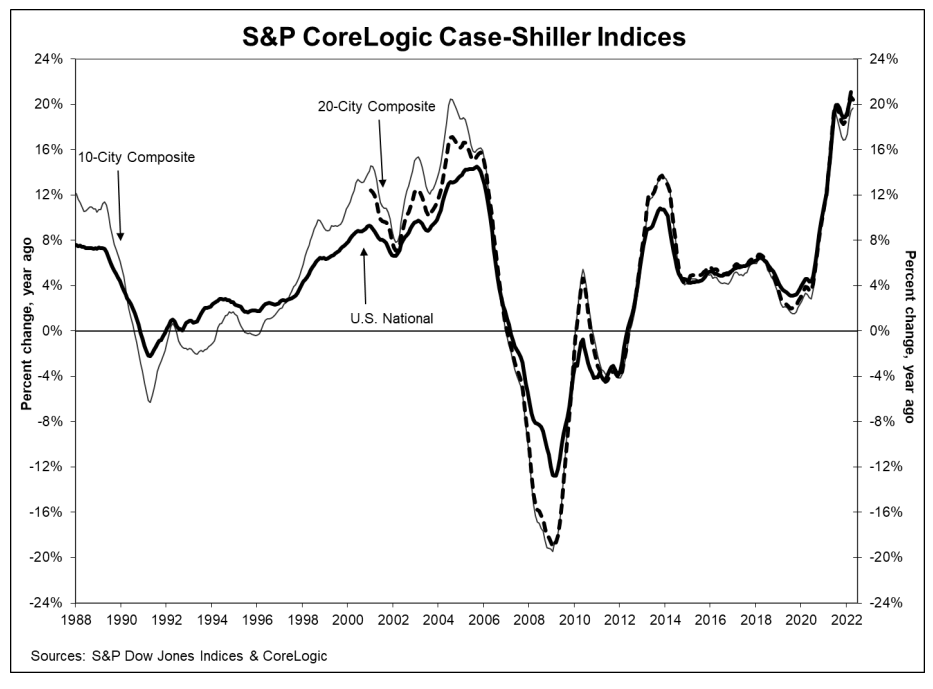 “We continue to observe very broad strength in the housing market, as all 20 cities notched double-digit price increases for the 12 months ended in April. April’s price increase ranked in the top quintile of historical experience for every city, and in the top decile for 19 of them,” said Lazzara. “In contrast with the past five months, when prices in most cities accelerated, in April only nine cities saw prices rise faster than they had done in March. There’s a regional pattern among the nine, as all five cities in our South composite (Atlanta, Charlotte, Dallas, Miami, and Tampa) are represented there.”

And as Selma Hepp, Executive, Research and Insights and Deputy Chief Economist in the Office of the Chief Economist at CoreLogic noted, signs of a tipping point in the housing market toward a greater balance between buyers and sellers is spreading wider, albeit only compared with some of the most competitive conditions seen since the early 2000s.

“More specifically, there is a buildup in overall active inventory, as fewer buyers are rushing to make offers, resulting in an increase in the number of homes that have had price reductions from the original list price,” said Hepp.

One reason for this may be the decline found in builder confidence, as the National Association of Home Builders (NAHB) in its NAHB/Wells Fargo Housing Market Index (HMI) reported builder confidence in the market for newly built single-family homes posted its sixth straight monthly decline in June, falling two points to 67—marking the lowest HMI reading since June 2020.

Citing a rise in home building materials, NAHB Chief Economist Robert Dietz noted, “The housing market faces both demand-side and supply-side challenges. Residential construction material costs are up 19% year-over-year with cost increases for a variety of building inputs, except for lumber, which has experienced recent declines due to a housing slowdown. On the demand-side of the market, the increase for mortgage rates for the first half of 2022 has priced out a significant number of prospective home buyers, as reflected by the decline for the traffic measure of the HMI.”

The S&P CoreLogic Case-Shiller U.S. National Home Price NSA Index also posted a 2.1% month-over-month increase in April, while the 10-City and 20-City Composites posted increases of 2.2% and 2.3%, respectively. After seasonal adjustment, the Index posted a month-over-month increase of 1.5%, and the 10-City and 20-City Composites both posted increases of 1.8%. In April, all 20 cities reported increases before and after seasonal adjustments.

Regionally, Minneapolis and Washington continued to post some of the slowest increases in annual gains, ranging from 12.3% to 13%. Despite having the slowest rate of annual price increases, these metros found double-digit growth rates for 17 consecutive months.

“With the Index looking at real estate markets in the rearview mirror, the fast-paced changes of the last two months are partly obscured,” said George Ratiu, Senior Economist & Manager of Economic Research at Realtor.com. “Mortgage rates, which averaged 5.1% in the last week of April, advanced near 6.0% in June, pushing the typical monthly payment $800 higher than in 2021. In addition, spurred by record-high asking prices and the desire to move beyond pandemic constraints, growing numbers of homeowners are selling their homes. These changes are resulting in cooling demand matched by growing inventory, a welcome downshift in competitive conditions for housing markets that seemed stuck in the fast lane for two years. Homes are spending more time on the market waiting for an offer and the share of homes with price cuts is rising. For buyers and sellers, the road ahead will require more flexibility in pricing, brushing up on negotiation skills, and acknowledging that market conditions today are different than even six months ago.”