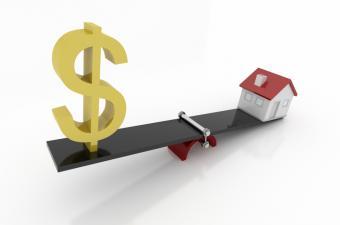 Housing policy affects income inequality and single-family housing in a number of ways. According to a recent report from the Urban Institute written by Gregory Acs and Paul Johnson, mortgage interest and real estate tax and transfer programs, voucher programs, and zoning laws all impact income inequality differently.

Housing tax and transfer programs can create work incentives for some people and disincentives for others. This positively influences the distribution of income, Urban Institute reported.

"Setting aside any effects on households’ work and savings behaviors, housing subsidies to low-income families reduce income inequality while the mortgage interest and real estate tax deductions increase it," the authors said. "On net, the distribution of post-tax, post-transfer income is slightly more equal than it would be in the absence of these three programs."

The report also found that housing vouchers reduce inequality. If no housing subsidies and the mortgage interest and real estate tax deductions were in play, the Gini coefficient would measure inequality at 0.424. But when housing subsidies are added to income, the Gini falls to 0.418. The share of income accruing to the bottom quintile rises from 4.9 to 5.2 percent, and the share accruing to the top quintile falls from 47.6 to 47.4 percent.

On the other hand, mortgage interest and real estate tax deductions slightly push inequality up. When the value of those deductions and housing subsidies is added to income, the Gini coefficient rises from 0.418 to 0.421. Additionally, the share of income accruing to the bottom income quintile falls from 5.2 to 5.1 percent, and the share accruing to the top quintile rises from 47.4 to 47.6 percent.

“On net, the equalizing effects of housing subsidies outweigh the disequalizing effects of the mortgage interest and real estate tax deductions on the post-tax, post-transfer distribution of income,” the authors said. “Though the total value of housing subsidies is about half that of the mortgage interest and real estate deductions, those subsidies accrue to low-income households and represent a larger share of those households’ incomes than the deductions represent for higher-income households.” 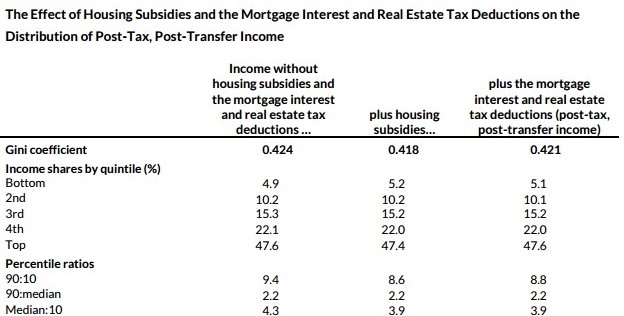