Mortgage Rates Edge Back Above 7% 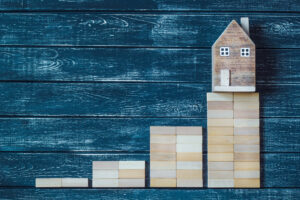 The mortgage rate pendulum continues to swing this week, as Freddie Mac reported that the 30-year fixed-rate mortgage (FRM) was back up over the 7% mark, averaging 7.08% with an average 0.9 point as of November 10, 2022, up over last week when it averaged 6.95%. A year ago at this time, the 30-year FRM averaged more than half that total, when it averaged 2.98%.

Just last week, the Federal Reserve raised rates at its November meeting by an additional 75 basis points—marking the sixth increase in 2022, and the biggest consecutive rate hike on record. To date, the Fed has raised rates in response to inflationary concerns in March (+25 points), May (+50 points), June (+75 points), August (+75 points), and September (+75 points).

“As the housing market adjusts to rapidly tightening monetary policy, mortgage rates again surpassed 7%,” said Sam Khater, Freddie Mac’s Chief Economist. “The housing market is the most interest-rate sensitive segment of the economy, and the impact rates have on homebuyers continues to evolve. Home sales have declined significantly and, as we approach year-end, they are not expected to improve.” 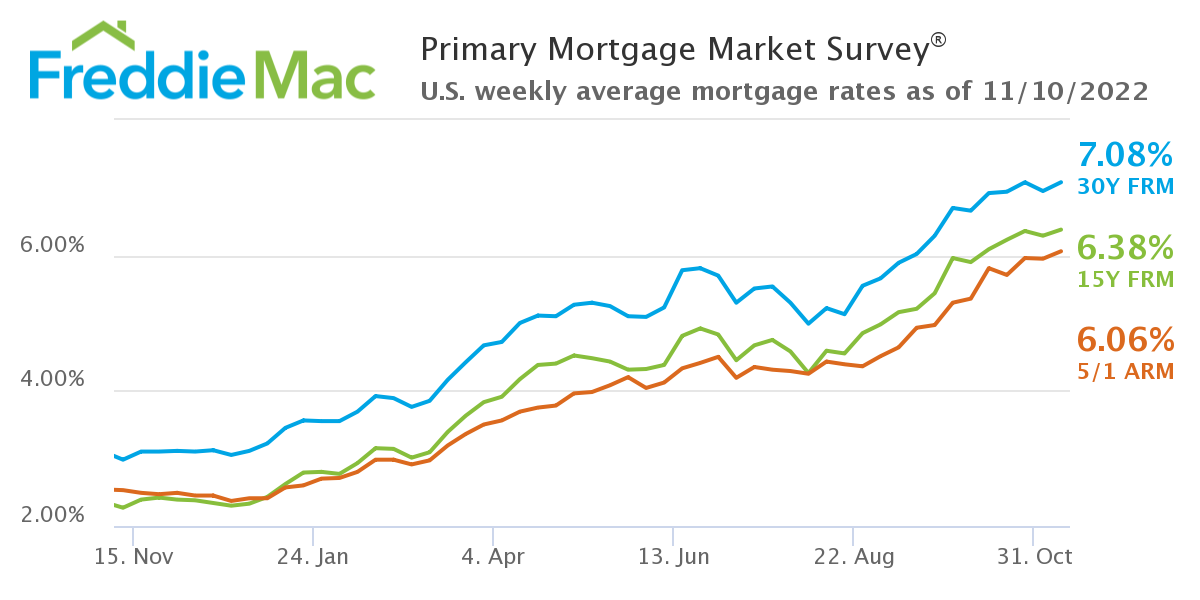 The rise in rates has forced mortgage application volume down once again, as the Mortgage Bankers Association (MBA) reported volume dipped nationwide slightly week-over-week, falling 0.1% for the week ending November 4, 2022. The MBA reported that the overall refinance share of mortgage activity fell to 28.1% of total applications, down slightly from 28.6% the previous week, as refi volume fell to its lowest level since August 2000.

“Unsurprisingly, at a time when mortgage rates are up more than 400 basis points from a year ago, with more than half of that increase coming in the last 14 weeks, home shoppers are reevaluating their options, which have changed dramatically,” said Realtor.com Chief Economist Danielle Hale. “The monthly mortgage cost of buying a typical for-sale home at today’s rate with a 10% down payment is up more than $1,140 compared to last year, and up more than $475 from early August, when rates briefly dipped below 5% (4.99%). Recent survey data show that just 16% of respondents said it was a good time to buy a home. Still, this week’s mortgage application data ticked up slightly, highlighting that even when it’s not a good time to buy, there are still home shoppers in the market for a variety of reasons. The key to making a good decision in this challenging housing market is to be laser focused on what you need now and in the years ahead, so that you can stay in your home long enough that buying is a sound financial decision. Another key point is to avoid stretching your budget, as tempting as it may be given diminished purchasing power.”

Fannie Mae’s latest Home Purchase Sentiment Index (HPSI) found five of its six major components decreased in October 2022, bringing the HPSI to 56.7, down 4.1 points from September 2022, to the lowest level seen in the Index’s 11-year history. A new survey low of 16% of respondents indicated that “Now is a Good Time” to buy a home, while the percentage who believe “Now is a Good Time to Sell” a home decreased from 59% to 51%—this equates to a full year-over-year 18.8 point drop in the Index.

"The HPSI reached an all-time survey low this month, in line with expectations that the housing market will continue to cool in the months ahead," said Douglas G. Duncan, Fannie Mae SVP and Chief Economist. "Consumers are increasingly pessimistic about both homebuying and home-selling conditions. Amid persistently high home prices and unfavorable mortgage rates, the ‘Bad Time to Buy' component increased to a new survey high this month, while the ‘good time to sell' component continued its downward trend.”