It's no secret in the industry that mortgage lenders have eased credit standards, but the real kick is that lenders expect this continue into the upcoming year.

Fannie Mae's fourth quarter 2015 Mortgage Lender Sentiment Survey found that more lenders expect credit standards to ease rather than tighten for GSE-eligible loans and government loans over the next quarter.

The survey found that the easing of credit standards may help solve some of the affordable housing problems that the housing market has been experiencing. 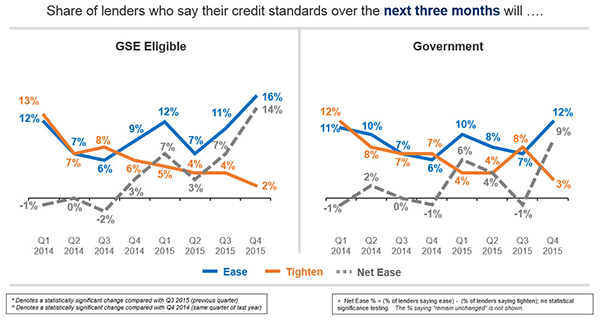 "On net, lenders told us in our fourth-quarter Mortgage Lender Sentiment Survey that they have eased and expect to continue to ease credit standards, which was a consistent trend throughout 2015,” Duncan noted. “Thoughtful easing will help mitigate some of the affordability decline moving into 2016. The use of Fannie Mae’s HomeReady mortgage was cited by some lenders in the survey to explain their expectations for easing credit standards and how they will increase consumers’ access to mortgage credit.”

The survey results showed that lenders reporting higher purchase mortgage demand expectations for the next quarter continues to decrease after reaching a record high in the second quarter. However, this outlook still remains above 2014's data.

For those lenders that are reporting a spike in mortgage demand over the previous three months is also down from the last quarter among all loans, but is above a year ago.

In addition, fewer lenders expect their profit margins to increase during the next quarter, with a negative 29 percent expecting profit margins to rise, a new survey low. Fannie Mae said that lenders surveyed blame “government regulatory compliance” for the stall in the profits. The picture is much worse for larger lenders and mortgage banks, with negative 56 percent and negative 53 percent, respectively reporting that negative profit margin outlook.