Housing numbers might be doing well in general, but what happens when everyone wants to buy a house but no one wants to build them?

That question isn’t an abstract worry. A new survey of single-family builders conducted by the National Association of Homebuilders (NAHB) has shown that shortages of labor and subcontractors have soared, with more than half the contractors surveyed reporting at least some shortage in nine building trades.

Overall, 72 percent of builders reported a shortage (either serious or some) of construction workers willing and able to do rough carpentry.

Averaged across the nine trades, the share of builders reporting either some or a serious shortage overall has skyrocketed over the last four years. Shortages were low (21 percent) in 2012, but ramped up to 46 percent in 2014, 52 percent in 2015, and now 56 percent.

NAHB economist Paul Emrath stated that a shortage of subcontractors could be quite serious, “and ignoring it gives an incomplete picture of the problem’s severity.” The most common effects of such shortages, he said, have been the need for builders to pay higher wages and subcontractor bids (an issue reported by 75 percent of builders in an earlier NAHB survey) that translates into higher home prices (68 percent) and making it difficult to complete projects on time (58 percent).

One bright spot: The shortages vary across the country.

“Not all builders in NAHB’s 2016 survey reported shortages,” Emrath said. “Some even wrote in specific comments that they were not seeing any shortage of labor in the markets where they currently build.” 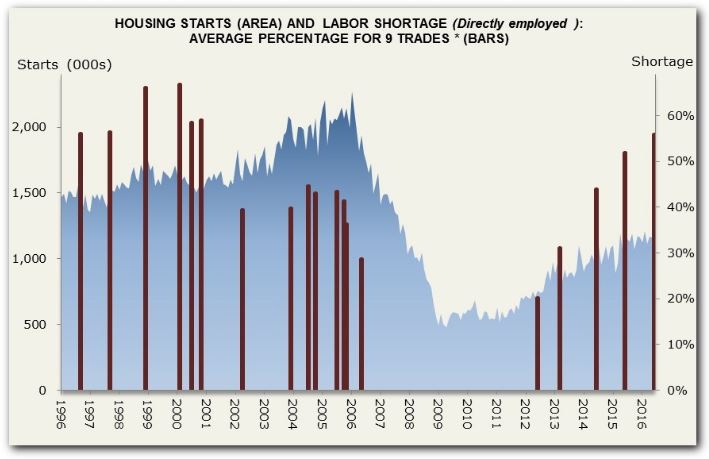