Freddie Mac’s latest Primary Mortgage Market Survey (PMMS) has found that the 30-year fixed-rate mortgage (FRM) rose slightly this week, averaging 2.80%, up slightly over last week’s 2.78%. A year ago at this time, the 30-year FRM averaged 2.99%.

“As the economy works to get back to its pre-pandemic self, and the fight against COVID-19 variants unfolds, owners and buyers continue to benefit from some of the lowest mortgage rates of all-time,” said Sam Khater, Chief Economist at Freddie Mac. “Largely due to the current environment, the 30-year fixed-rate remains below 3% for the fifth consecutive week, while the 15-year fixed-rate hits another record low.”

Improvements in the economic landscape were found as today, the U.S. Department of Labor announced that for the week ending July 24, the advance figure for seasonally-adjusted initial unemployment claims was 400,000, a decrease of 24,000 from the previous week's revised level. The previous week's level was revised up by 5,000 from 419,000 to 424,000. 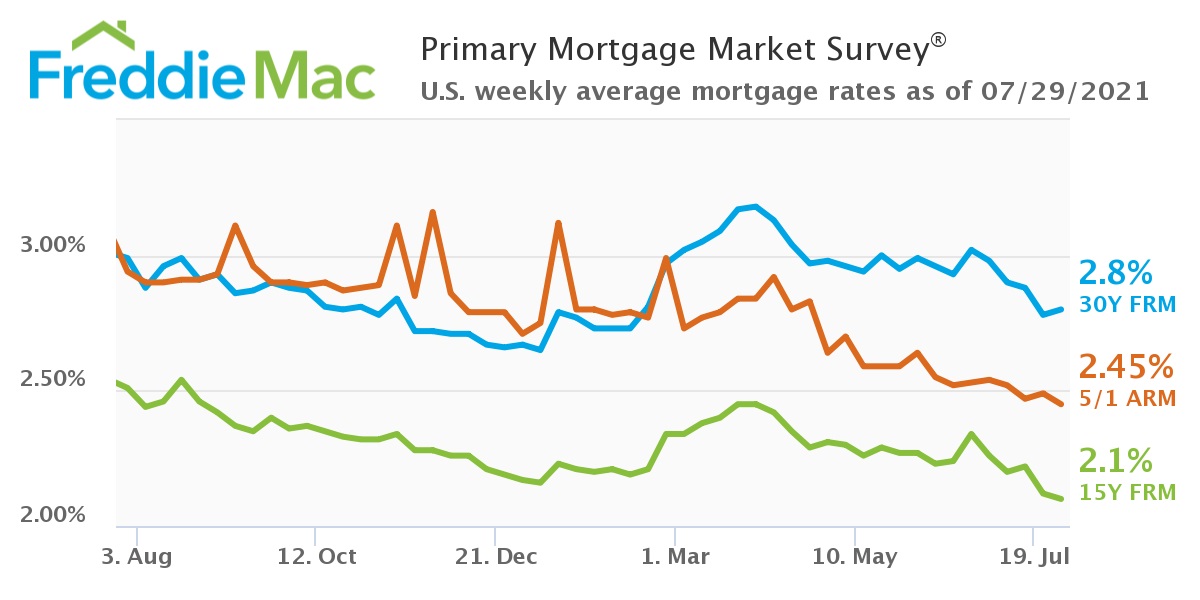 Redfin recently reported that asking prices of newly-listed homes were up 12% from the same time a year ago to a median of $360,975, just shy of the all-time high set during the four-week period ending June 27. High prices and affordability concerns continue to plague the first-time homebuyer market, as the Census Bureau and U.S. Department of Housing and Urban Development (HUD) have reported the median sales price of new houses sold in June 2021 was $361,800, with the average sales price at $428,700. In terms of supply, the seasonally‐adjusted estimate of new houses for sale at the end of June was 353,000, a supply of 6.3 months at the current sales rate.

“Low rates are fuel for continued home price increases, which notched a 50th week of double-digit gains in the most recent week,” said Realtor.com Chief Economist Danielle Hale. “With prices high, affordability is tied even more strongly to mortgage rates, so potential buyers starting to hunt for a home should consider what changes in mortgage rates mean for their home shopping budget.”